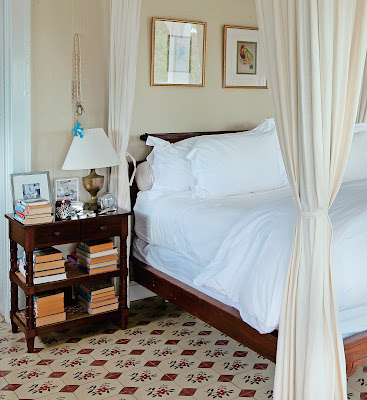 [Photo © Tim Street-Porter from Annie Kelly's Rooms to Inspire by the Sea. Rizzoli New York 2012.]
Consider Tim Street-Porter's photo of India Hicks's bedroom a teaser. This week I had a chance to see an advanced copy of Annie Kelly's soon-to-be-released Rooms to Inspire by the Sea, and I need a few more days to hone in on which elements -- from roughly 240 captivating image-filled pages -- to highlight.

Kelly focuses on twelve inspiration-file-worthy dwellings, each with a distinct spirit. Some are well known among design junkies, although seen here from fresh angles through Street-Porter's lens, while others are less familiar. And in addition to the complete tours of these houses (actually, there are a couple of beach-side apartments in the mix, too), Kelly examines details from other places. No surprise, I was won over when I cracked the book and landed on a spread of Doris Duke's Shangri La before even coming to the table of contents. 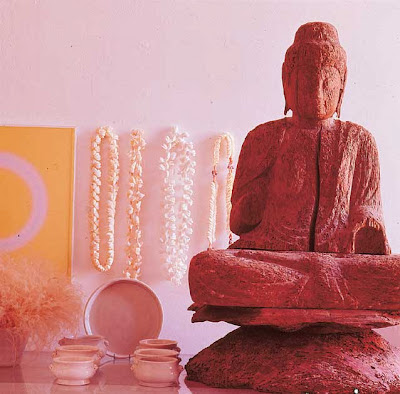 [David Hicks's circa late-60s tablescape at his Roquebrune-sur-Argens house, as seen in David Hicks: Designer by son Ashley Hicks.]
When I came to the section on Hicks and David Flint Wood's Harbour Island house, I got out my magnifying glass. The photographs are certainly large and vibrant but with new (to me) tablescapes, vignettes, and views to savor, I didn't want to miss any tiny detail. One thing that grabbed my attention: beads hanging next to the couple's bed. I couldn't help flashing back to a 2008 post with a tablescape by India's father, David Hicks. Note the Tahitian shell leis on the wall near a time-worn 15th-century Chinese wooden Buddha bought in Japan. According to Ashley Hicks, the abstract piece to the left is by Peter Sedgley.

More on Kelly's book to come. In the meantime, see other beads here. (De Soto's Footsteps, the small exhibition with some select 16th-century glass beads, ends March 31, 2012.)
Posted by Style Court at 12:00 PM

don't you find you do some of the same things as your parents too - very apt title to the post! You have such a great eye for detail.

Stefan -- yes! At least when it comes to stripes :) And thanks for the kind words.

I look forward to seeing more of the book. It looks like a nice one.