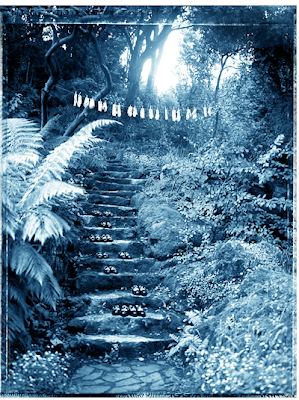 [© Lacey Terrell, Untitled, 2010 C-print, 30" x 40"]
The steps in this ethereal piece by photographer and mixed media artist Lacey Terrell remind me so much of one of my favorite (and my oft-blogged) spots in Atlanta, Cator Woolford Gardens. 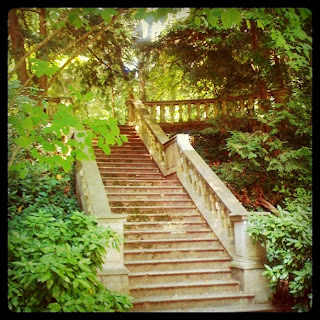 [Photo my own]
Although these days the 'secret' gardens may be rented for private parties and weddings (with funds benefiting The Frazer Center), the steps still lead to the stately 1920s Druid Hills house built by Charlotte and Cator Woolford. (Not so unlike Highclere Castle serving as a hospital during WWI, the Woolford house has long been open to the community; no longer a private home, it now functions as the Atlanta Hospital Hospitality House.)

In her current body of work, Lepidoptera propriedae, Terrell reaches further back in time, to the Victorian era and the photography of Lewis Carroll. She's especially fascinated with the tension between private and public identities, and the concept that many things aren't what they seem to be at first glance. The Victorian pastime of collecting specimens such as butterflies is clearly evoked in her photo-based mixed-media pieces, complete with shadowboxes and specimen pins, but she invites the viewer to come closer and look for obscured layers. An exhibition opens in L.A. at Gallery 825, La Cienega Boulevard on March 10.
Posted by Style Court at 8:21 PM

Any pictures of the house to share? You always leave me wanting more!

Stefan -- I guess that's the goal...always leave 'em wanting more :) but no, sadly, nothing of the inside. I may have an outside pic. I'll try to get some fresh shots of the facade with spring blooms!

I love Terrell's work, and am enchanted with her new mixed media pieces.