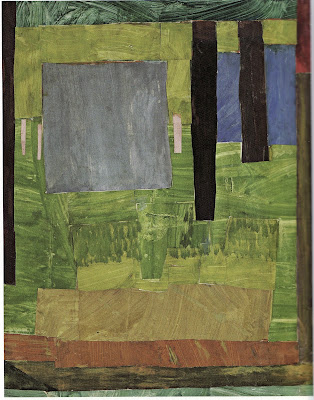 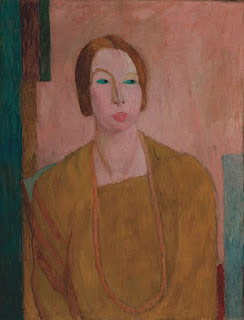 [From Steve Moyers writing for Humanities, March/April 2009 Volume 30, Number 2: Vanessa Bell’s 1915 rendering of patron of the arts Mrs. James Hutchinson was an early tremor in the modernist artquake that had its first rumblings during the 1910 Post-Impressionist exhibition, organized by Roger Fry. Shown above, Portrait of Mary St. John Hutchinson, 1915. Oil on canvas, 31 x 21 3/4 inches, collection of the Cornell Fine Arts Museum, Rollings College, gift of Dr. Kenneth Curry, Phd, R. ’32.] 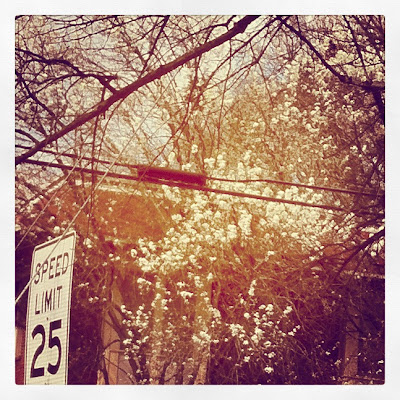 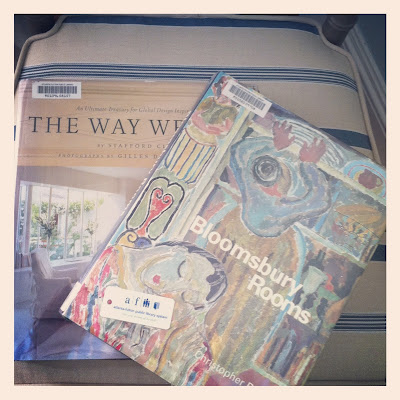 [Photo my own]
It had been a while since I looked for books without an in-house Starbucks three aisles away but last week something drew me to my neighborhood public library. Right there waiting in the design and decorative arts section was Bloomsbury Rooms: Modernism, Subculture, and Domesticity, Christopher Reed's award-winning tome. 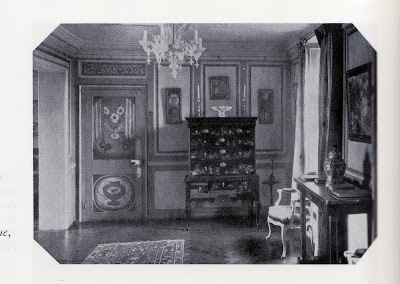 [Vanessa Bell, painted door in study of River House, 1919,
as illustrated in Vogue early November 1924. From Bloomsbury Rooms.]
Reed's book is a wonderful resource for Bloomsbury fans, or anyone who just wants to learn more about the unconventional group's place in British art history, because he addresses many of the myths surrounding the artists and he explores everything -- their easel paintings and decorative work including not only the Omega wares and Charleston but also 1920s projects for clients. Pouring over the pages, I'm seeing lesser-known Post-Impressionist-influenced works by Vanessa Bell and Duncan Grant along with urban interiors published in Vogue during the Roaring Twenties. 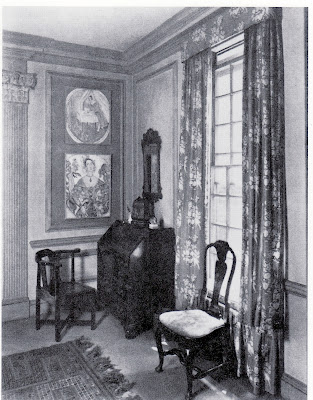 [Vanessa Bell, painted panels inspired by Italian sequin work, part of decorated rooms for Mary and St John Hutchinson at 3 Albert Gate, London, 1926, as illustrated in Vogue late August 1926; from Bloomsbury Rooms.]
After the 1930s, and until recently, Bloomsbury's visual arts were typically disparaged or overly romanticized as some sort of fanciful retreat from modernism. Reed, though, makes the case that Bloomsbury deserves to be revisited with fresh eyes. He cites a 1929 book, The New Interior Decoration, by former British Vogue editor Dorothy Todd and arts patron Raymond Mortimer that touts both the masculine, unadorned, uniform look of Le Corbusier and Bloomsbury's feminine, eclectic approach. The latter might combine "modern French pictures, 18th-century French furniture, a Georgian mantelpiece and decorations by contemporary English painters." In short, a different yet nonetheless very new way of living.

Reed believes much of the mid-20th-century prejudice against Bloomsbury style stemmed from its inherent femininity -- appreciation for the domestic sphere and celebration of the individual. I see their experiments as a precursor to everything domino magazine embodied: Home should make you happy. Vanessa Bell first began living this philosophy in 1904, after the death of her father, when she was able to move to 46 Gordon Square in London's Bloombury district, ditch the dark woodwork and plush red velvet, and create an airy, white-walled space punctuated by vividly colored Indian shawls.* 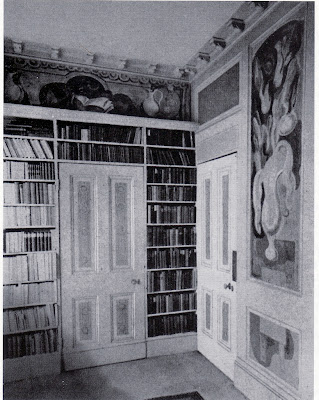 [Vanessa Bell and Duncan Grant, decorated room for for Mary and St John Hutchinson at 3 Albert Gate, London, 1926, as illustrated in Vogue late August 1926; from Bloomsbury Rooms.]
How I wish we had photos of Bell's first place. At least the black-and-whites of the Vogue-published interiors she and Grant created survive. Try to imagine entering River House, the London home of Mary and St John Hutchinson, around 1919 or their Albert Gate digs a bit later in the 20s. Think Matisse, not 1980s decorative painting for nurseries. Bell's and Grant's decorative work would seem startlingly fresh.

Although not shown here, there is illustrated in Reed's book an example of Grant's 1916 wallpaper made with rhythmic paint splatters. As Reed says, it's hard to look at it now and not be instantly reminded of Pollock. 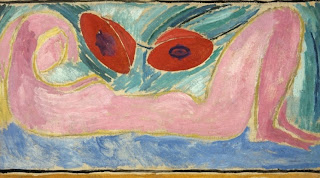 It is really interesting to see in those Vogue photographs the mixture of English and French antiques and Georgian panelling and Bloomsbury painted decoration - as you say there were all these different currents in the 1920s and 1930s, some modernist, some historicist, and mixtures of both.

Yes. We hear so much about Bloomsbury being at the height of fashion in the 20s but, apart from Reed's book at least, I rarely see examples like this. The mix seems avant-garde in its own way.