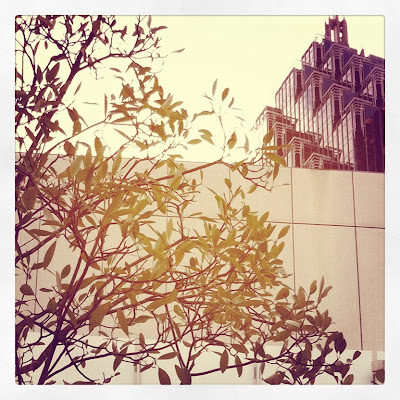 [Unless otherwise noted, photos are my own.] 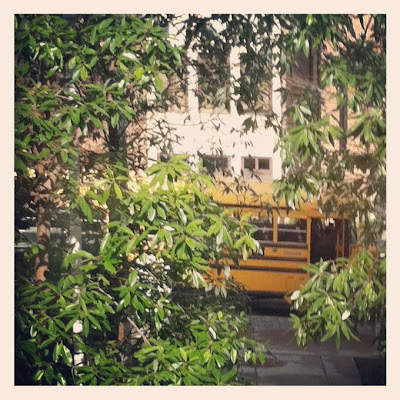 It wasn't a Ferris Bueller's day off for me, but crossing through the High's galleries this morning I thought again of this scene. Not so much as I passed the long lines of bouncing, eager little kids linked hand-to-hand, but when I spied a group of teens photographing themselves in the familiar stances of Cameron, Sloane and Ferris. 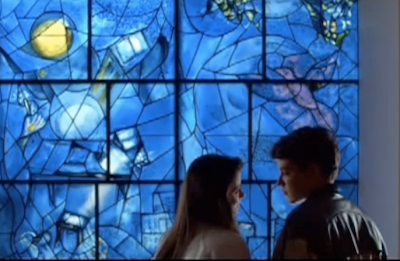 [Screengrabs from John Hughes commentary about the Art Institute of Chicago scene
in front of Marc Chagall's America Windows.] 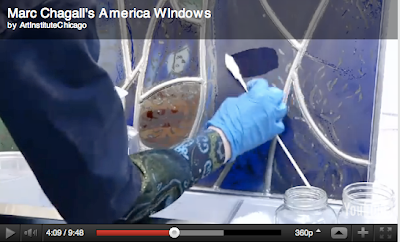 [Click here to see a video about the recent restoration of Chagall's glass windows.]
The Art Institute of Chicago gave director John Hughes unusual access to film the trio in front of masterworks including his favorite Picassos, a Matisse, and of course Marc Chagall's America Windows. (Recently restored and re-installed, Chagall's glass windows were originally unveiled at the museum in 1977.)  The students visiting the High today were there to see other Matisses and Picassos, which brings me back to the March Vogue. 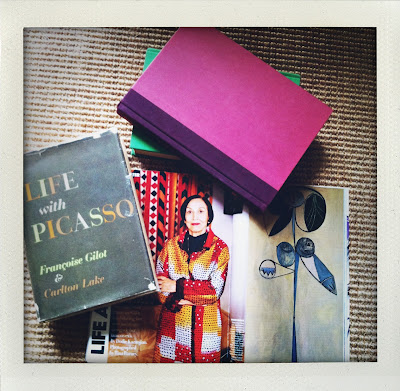 In addition to Schuyler's project, I was happy to find Dodie Kazanjian's piece about Francoise Gilot (at 90!) and the upcoming Gagosian exhibition, Picasso and Francoise Gilot [1943-1953]. Kazanjian notes that this will be the gallery's fourth in a series of Picasso shows and the first-ever exhibition pairing his works with those of his muse's. (It will be installed at the Manhattan location.) 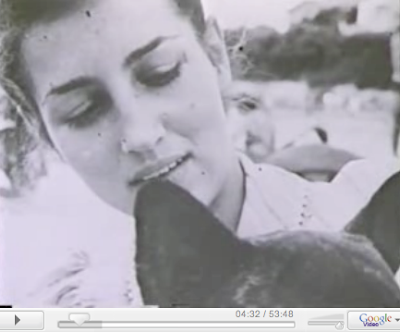 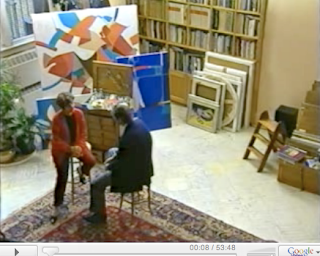 After reading the Vogue story I was inspired to revisit Charlie Rose's hour-long interview with Gilot. I've linked to the program before but was curious to see if the entire 1998 conversation is still accessible online. It is, and well worth a watch. (Just a bit of trivia: the fabric behind Gilot in Tina Barney's photo for the magazine can be seen in the background in Rose's interview.) Picasso's jewelry-making doesn't come up during the talk, but for the backstory on the necklace Gilot wears in the iconic 1948 Robert Capa photograph, click here. Gilot does discuss her affinity for Matisse.

To also hear Rose in relaxed conversation with two amazing Picasso and Matisse scholars -- the late Kirk Varnedoe and John Elderfield -- click here. And don't forget in June LACMA will exhibit Matisse's massive La Gerbe for the first time alongside its full-scale maquette and other materials that tell the story behind art patron Frances Lasker Brody's commission.

BTW: John Hughes said that, as a teen, the Art Institute of Chicago was his sanctuary. This Saturday, February 25 from 7 to 11 p.m., the High is hosting Re-Mastered, a special teens-only free night with dancing, a scavenger hunt, creative projects and open mic opportunities.
Posted by Style Court at 9:59 PM