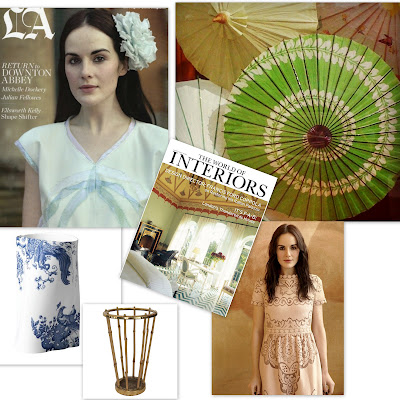 [Photos of Michelle Dockery by Perry Ogden for LA Times Magazine, January 2012, with styling by Grace Cobb; parasols in Mitzi & Romano window, Virginia Highlands, Atlanta, my own; brass and bamboo midcentury umbrella stand from Orange; Ken Eastman for Royal Crown Derby Blue Aves vase.]
It's strange. The British Aesthetic Movement was often parodied during its time (1860 to 1900) and misunderstood and maligned for much of the 20th century, but the way we live today with design and art -- when we pick up a lifestyle magazine (whether in print or on our iPads), go to an artist's reception at a gallery, attempt a DIY project inspired by something we saw on a design blog, or buy a vase or pillow by a specific designer -- this all goes back to the avant-garde Victorian phenomenon.  And while contemporary designers including Robert Kime and Michael Smith have directly referenced the era in some of their projects, it's easy to feel hazy about the full scope of the Movement. 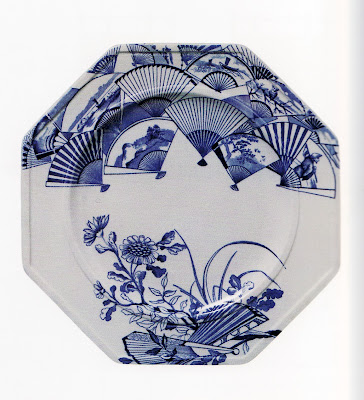 [Plate, white earthenware, printed, circa 1875-1885, made by Brown-Westhead, Moore & Co., England. The V & A collection.]
Maybe you're already well-acquainted with William Morris's textiles or Edward Burne-Jones's paintings. There's much more to explore, though, as shown by a collaboration between the Fine Arts Museums of San Francisco and the V & A with The Cult of Beauty. 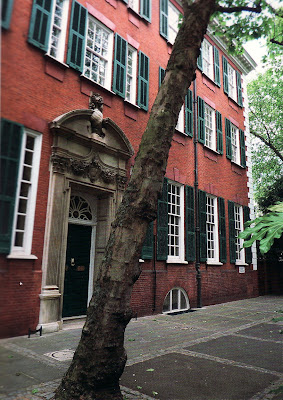 [Captioned in the V & A exhibition catalogue as Richard Norman Shaw, 170 Queen's Gate, South Kensington, London, designed 1888-90. Photo by Stephen Calloway.]
It's the first comprehensive international exhibition of beauty-worshiping British Aesthetic Movement designers and painters, and the better known masterworks of the era have been gathered together for the West Coast debut February 18. But in this post, I'm highlighting a few not-as-wildly-famous pieces from the exhibition catalogue. Take, for example, the earthenware from Brown-Westhead, Moore & Co. 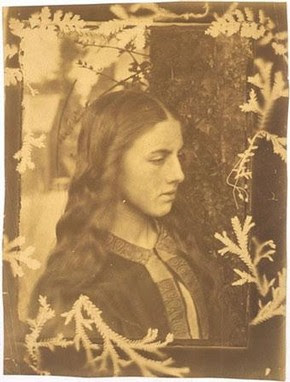 [Oscar Gustav Rejlander in collaboration with Julia Margaret Cameron, 'Kate Dore with Photogram Frame of Ferns', about 1862. Victoria and Albert Museum no. PH.258-1982.]
Of course, photography was entirely fresh territory. Oscar Rejlander and Julia Margaret Cameron were among the 19th-century photographers who went beyond convention, bringing a painterly sensibility to their work. BTW, in the catalogue there's a nice section devoted to art photography of the period. 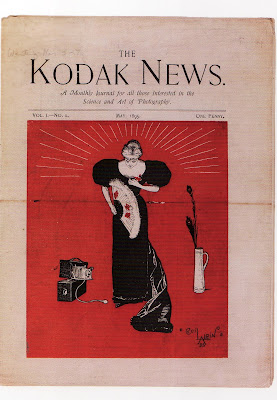 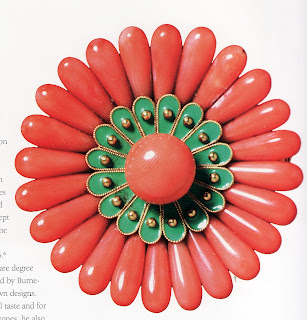 [Carlo Giuliano, brooch, coral and enameled gold, 1875-97, the V & A.]
London jeweler Carlo Giuliano was favored by artsier crowds for delicate combinations of enamels and colored stones -- beautifully crafted but unpretentious pieces that might be described as anti-bling. His inspiration came from traditional Indian jewelry and archeological digs happening during the 19th century. 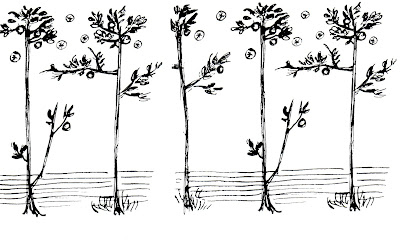 [Dante Gabriel Rossetti, pen and ink sketch for wallpaper design, 1861.]
On the domestic front, there was unprecedented interest in interior decoration. Artists and designers had 'high-end' projects, working with both the aristocracy and the newly moneyed, but also became involved with design for the bourgeoisie. And artists became celebrities. Their lives, specifically how they decorated their own houses, fascinated the public. Curator Stephen Calloway notes that when Dante Gabriel Rossetti lived with model/muse Lizzie Siddal on a tight budget at Chatham Place, the painter seemed to become absorbed with interior decoration as a means to create a poetic mood; he sketched ideas for original wallpaper featuring a stylized repeat of fruit trees. Although never produced, Rossetti's thought was to have it printed on humble brown packing paper or blue grocer's paper. 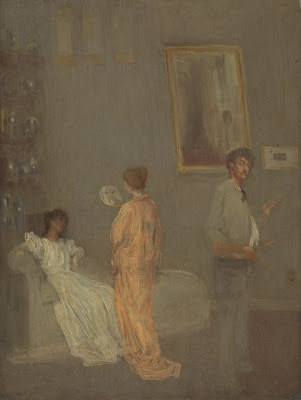 [James McNeill Whistler (American, 1834-1903) The Artist in his Studio, 1865/66, The Art Institute of Chicago.]
At the same time, Whistler's depictions of rooms, Japanese paper fans, Chinese blue-and-white ceramics, and women in soft pastel and white dresses had a long-lasting impact on fashion. 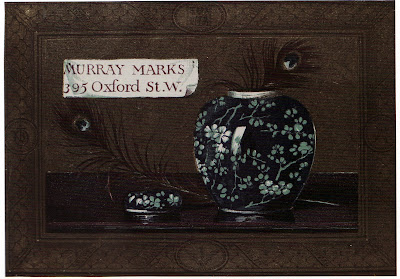 [Circa 1875 business card by Henry Treffry Dunn, previously attributed to William Morris, Rossetti, and Whistler. Stephen Calloway collection.]
Murray Marks was an art dealer who encouraged the taste for 'Chinese blue' among the rich. Again, according to Calloway, Marks supplied collector Frederick Leyland with the cache of ceramics used in the infamous Whistler-designed Peacock Room. 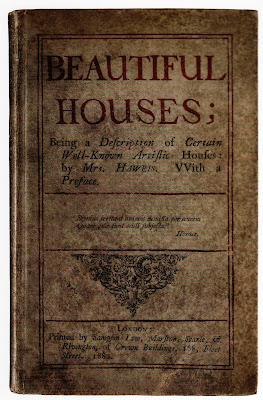 [Cover of Mrs. H. R. Haweis Beautiful Houses; Being a Description of Certain Well-Known Artistic Houses, 1882. Stephen Calloway collection.]
The aspiring middle-classes had a range of new books and advice-oriented literature to pour over for guidance. Largely targeted to women, the gist was be your best self. 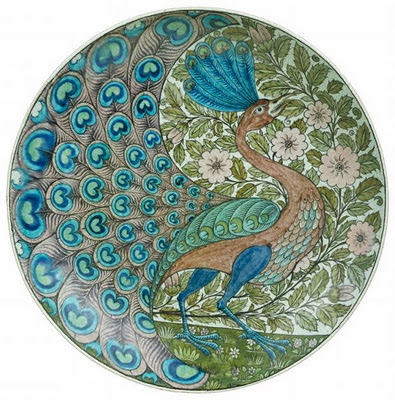 [Charger, William De Morgan, circa 1888. The V & A Museum no. C.261-1915.]
So, this is just a tip of the iceberg. I hope these examples inspire you to visit the show or check out the wonderfully detailed and accessible accompanying catalogue and take a second look at this far-reaching period in English design. The inspiration board at top represents connections I've made with the era, encompassing some bamboo, which relates to Japonisme, and contemporary blue-and-white. I'll get into the iconic textiles in future posts. 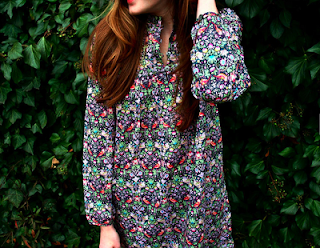 Many thanks to the always resourceful Emile over at the NT for providing this additional source for the Shaw building in London. (BTW, the Imperial College townhouse may be rented for weddings and special events.)
Posted by Style Court at 12:18 PM

DA has definitely made me obsess over more periods of English design! I'm more curious about the decades before DA (Pre-Edwardian as shown here), the WWI era and, now, can't wait for season three and the 20s.

Interesting post. It must have been amazing to be a part of that movement. On the other hand, I think what's happening today in the design blog community regarding aesthetics, may be considered a movement in the future.

Yes, and also it will be interesting to see how design historians look back at the 21st century, just in terms of the massive amounts of recorded material they'll have with nearly the whole population recording their own work/their own lives. At least depending on what survives.

I love the blue and white plate...gorgeous!!

Courtney, You know this is my favorite post of yours ever - it is also what I love to write about best! I don't know if you saw my post after New Years "We Are the New Victorians," but take a look if you have a minute! I wish that I could get to the show - going to send my friends and hope for a catalog. And I had never seen that business card by Henry Treffry Dunn before - just loving it and thinking of how to incorporate it into my own! I love the way you always pick out small fine things.:-) J

Doesn't the card have flair? I hope you can make it to SF or at least order the book. You'll love it, I know.

Lovely post! And thanks for the mention of the umbrellas. I was trying to figure out how to find that old post on your site the other day!

Really LOVE that your site is not all fluff like so many out there. Kudos for your work!

The V and A book definitely lists this as a Shaw, 170 Queen's Gate, so I'm looking into it right now.

Thanks for bringing this to my attention.

Mystery solved! Please see the update at bottom of the post.

Thank you for solving the mystery. The house is on the uni campus and as such not on the main drag of Queen's Gate, although the side facade is. They share an address though. I've been to see it - a very pretty house.

Happy to help clarify things -- or I should say happy Emile had such a great resource to share! The building is one of Shaw's later works and not always so quickly associated with his style.