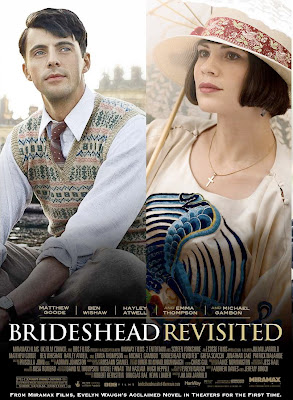 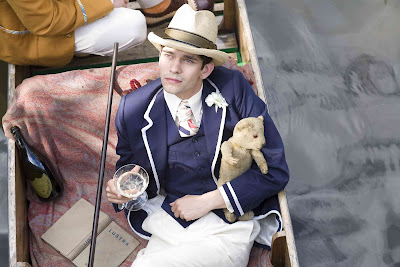 [Photo by Nicola Dove for Miramax Films:
Ben Wishaw as Sebastian Flyte in Brideshead Revisited, 2008.]
Over at Slate's ever-entertaining TV Club, there's an ongoing discussion about alternate period fare to watch or read during the long wait between Downton Abbey's Christmas finale, this Sunday, and Season Three, which will be set in the 1920s. Brideshead Revisited, the book and/or the 1980s miniseries, was one suggestion. Since I've never seen the 80s version (I know -- everyone says I should), it's the costume and set design for the 2008 adaptation that comes to my mind. And I've made some Cult of Beauty connections. 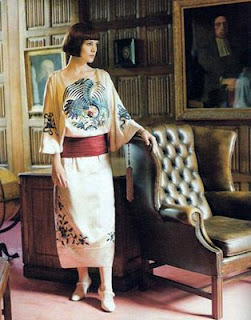 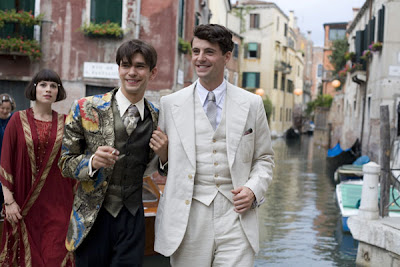 [Atwell, Whishaw and Matthew Goode in Miramax Film's Brideshead Revisited; image via Virtual History.]
Of course, aristocratic English interiors are all about inherited ease. Those of us who gravitate to the look appreciate how hard it is to date some of the rooms, at least at a quick glance, from decade to decade. 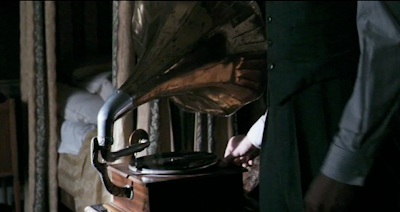 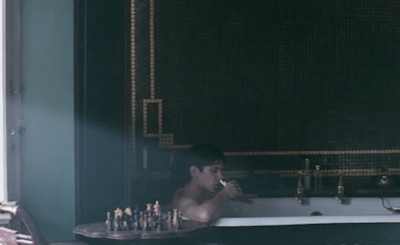 Usually, the clues that tell us we're not in the 18th or 19th century are the lamps, tune-playing technology, and bathrooms. (Speaking of which, how Miles Redd-chic is Sebastian's bathroom? Off a Castle Howard bedroom in real life.)

In The Cult of Beauty exhibition catalogue, David Park Curry writes that some of Whistler's lighter, airier, later-Victorian exhibition designs foreshadow what will happen in 20th century decor (learn more about the artist's rooms here). But the Aesthetic legacy I see in Brideshead has to do with clothes and textiles -- costume designer Eimer Ni Mhaoldomhnaigh's take on the 20s.

Sebastian is something of a dandy. Mostly he wears crisp Oxford linens and sorbet hues but in one scene he dons a richly patterned jacket and contrasting patterned tie. From one angle, this jacket has the look of a lush Chinese silk; in another view it feels a bit Italian. Sister Julia wears a dress with distinct Asian influences (Chinamania and Japonisme were Aesthetic Movement crazes). Aesthetic fashion trends probably paved the way for more self-expressive, avant-garde clothes in the Roaring Twenties and throughout the 20th century, as V & A Head of Research, Christopher Breward, points out. 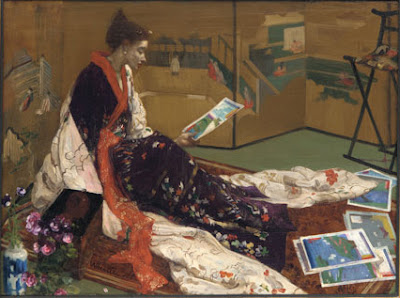 [Caprice in Purple and Gold: The Golden Screen, 1864, James McNeill Whistler (1834-1903). Freer|Sackler, Smithsonian Institution, Washington, D.C.: Gift of Charles Lang Freer.]
Curious about Americans who were passionate about Asian design? In March, The Frick is hosting a two-day symposium: The Dragon and the Chrysanthemum: Collecting Chinese and Japanese Art in America from the 18th to the 21st Century. 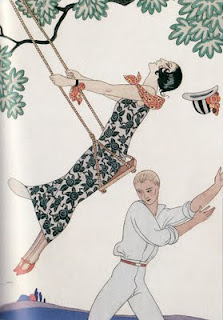 The first in this series about less expected legacies of the Aesthetic Movement starts here. You might also like Parks and Rec.
Posted by Style Court at 6:58 PM

I came to the same conclusion, that I really want to watch Brideshead Revisited, to get my fix of English period drama, as soon as Downton Abbey ends this season. I was hoping to find it on Netflix streaming, but alas it was not to be.

The 2008 version is available to rent through iTunes. Unfortunately I don't think the miniseries is, but over at Slate there are some other promising alternates.

Interesting, I don't remember the costumes at all from the original--mainly the rooms, architecture and light. I think a 30th anniversary DVD was just released, maybe it will be on Netflix soon?

I'm really enjoying this string of posts. I have to be on the West coast later in the spring and am going to try to work in a trip to SF to see the exhibit.

So glad. If you go, let us know what you think. Appreciate the original BR tidbits -- thanks.

Try the first few episodes of the TV series Brideshead. In rewatching a few years ago, I found it downhill after a good beginning, however.

I can't believe you haven't seen the original TV version!! No comparison to the more modern one....

the original tv version is wonderful!

I agree! And can recommend getting the dvd's for yourself. The first few episodes are so beautifully shot and poetic in atmosphere, you'll want to see those again and again!

Thanks for the input everyone. I'll have to look into the dvd!

You should definitely watch the 1980s version: it has fantastic actors and ditto production values and is beautifully paced. I disagree with the Classicist here, I think it slowly builds in richness and complexity. It is just a bit more leisurely, as TV series were then. But that only makes it more enjoyable for people like us who like to study the decor and the costumes.

And the 1980s series also put the house centre stage, as a character in its own right, as a beautiful and demanding object that the other characters are bewitched by and fight over.

Which is why I was thinking of that series when we were recently discussing the cinematic potential of the 'exiled collector' William Bankes and his house and obsession Kingston Lacy.

Having seen that series first, I found the 2008 film far too short and disjointed, although I could see it was beautifully produced.

Although I loved the rooms.. I must admit I watched this film for Matthew Goode. whom I also loved in Leap Year! The English have such Style.then and now!

I second Emile, the 1980's version is lovely although I'm not a fan of Evelyn Waugh novels.

And as Relished Roost said, Matthew Goode is dreamy.

Please, no, PLEASE see the true version of 'Brideshead Revisited' from 1981, directed by Michael Lindsay-Hogg and Charles Sturridge. This series is possibly the finest production of anything at any time - ever! The production values, casting, performances (Jeremy Irons seated at breakfast with his father John Gielgud for example) and Laurence Olivier portrays the epitome of a British Marquess prior to the great war.
Sadly, the 2008 production misses in quality, style and taste on every level.
Actually I watch the 1981 version for approximately one week nearly every two years --- truly, it's more than worth the focus.
And when you've done this take note of the film 'Where Angels Fear to Tread,' also directed by Charles Sturridge from an E.M. Forster novel. The cast consists of Helen Mirren, Helena Bonham Carter, Judy Davis, Rupert Graves and Barbara Jefford in easily her finest film performance. Take note of the Opera House scene!
PLEASE do this.
I predict you'll never show interest in the 2008 version of 'Brideshead...' again. It's so second rate in comparison.
You're marvelous!

I love both versions of Brideshead Revisited, so don't be afraid to give the 2008 a chance. Actually, I've noticed that viewers who first watched the 1980's series on PBS tend to dis the later more concise version, actors and all. But in a reverse situation, both my daughter and I saw the newer version first and we love it and watch it over and over. If you have eleven hours to spare, yes by all means indulge in the 30th anniversary collection. My college girl found it very artistic but slow going, but she loves and prefers the Ben Whishaw interpretation of Sebastian in the newer version. Hats off how they condensed it into two hours.