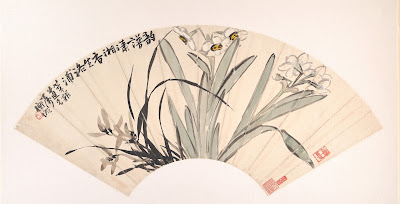 [Click to enlarge. Narcissus and Orchid, 1920 (on folding paper fan mounted as an album leaf) by Chen Hengke (Chinese, 1876–1923) ink and color on alum paper. Gift of Robert Hatfield Ellsworth, in memory of La Ferne Hatfield Ellsworth, 1986. The Metropolitan Museum of Art.]
I was trying to research the flowers in Downton Abbey. 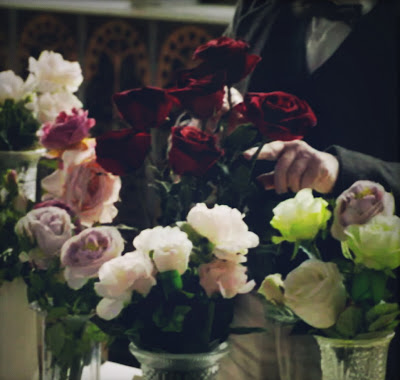 [Screengrab from Downton Abbey, season one, episode five.]
But then, revisiting some things in Lady Sybil's room, I became distracted. 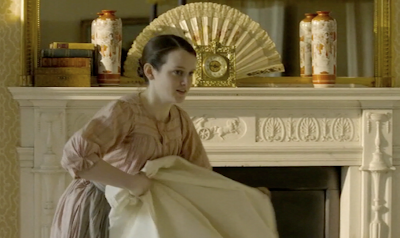 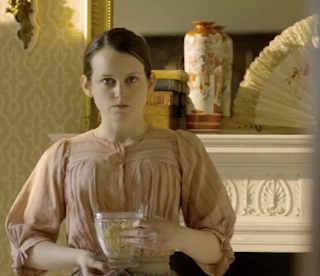 I know, I know. A lot has already been said about the show's sets and Highclere Castle where much of Downton Abbey is filmed. Early on, Patricia Shackelford, aka Mrs. Blandings, did a terrific interview with DA's production designer, Donal Woods. Still, I haven't tired of the luminous mix on Sybil's mantel. I love how the arrangement is thrown off a bit by the books stacked at the edge (very Sybil)  and I like the added layer of the fan. In fact, needing a Friday Piece with ties to orchids and the 1920s, I decided it would be another fan.

Shown at top is 20th century Chinese painter Chen Hengke's work on folded paper, Narcissus and Orchid. Surf over to The Met to get a detailed look at his wonderful brushwork. Part of post-Qing China, the artist studied abroad in Europe and Japan, and then adapted traditional Chinese styles for a new era (more on this over at Princeton's Asian Art Collection). Other examples of Chen Hengke's orchids can be found at the Indianapolis Museum of Art. 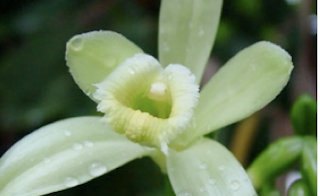 I love this post! I have starting really studying the decor of the Abbey too.

Sidenote, I thought of you and your travels when I pulled some of the Asian pieces together. The new images on your site look great!

Isn't it incredible how inspiring the show has been - on so many levels? Did you see the article in the NY Times this week about all the Downton Abbey parties? It's really struck a chord.

Good timing for me - I just started rewatching season 1 last night. Now that I don't have to worry about the plot, definitely more time to appreciate the set & costumes.

We missed this series when it was originally aired but have just seen it on DVD. I found the plot griping but a little over the top. But as you say the settings and costumes are wonderful. I have just found the 'original' for the stylish lace coat that the dowager Countess wears in several scenes: there is a wonderful 1898 photograph of Lillie Langtry wearing such a coat (illustrated in the 1998 catalogue of the 'High Society' exhibition at the National Portrait Gallery, London).

Stacy -- I know! Haven't seen the Times piece; thanks so much for the alert.

Emile -- Great discovery! Thanks. Looking forward to checking it out.

Marissa -- the re-watches are always a lot of fun :)

I really like the Chen Hengke's fan! There's something in "Narcissus and orchid" that reminds me of Hokusai's "Orange orchids", another painting that I love very much...

Thank you for sharing the information on this Chinese painter.

decomondo -- thank you. I'll have to check out "Orange Orchids"