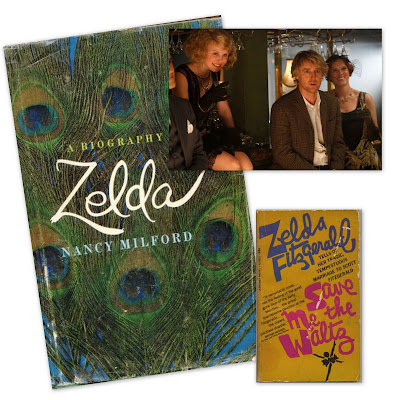 [Clockwise from the left: 'Peacock feather cover' image of Zelda: A Biography by Nancy Milford from WeRead; still from Midnight in Paris -- left to to right: Alison Pill as Zelda Fitzgerald and Owen Wilson as Gil. Photo by Roger Arpajou © 2011 Mediapro, Versátil Cinema & Gravier Productions, Courtesy of Sony Pictures Classics; Zelda's own novel, Save Me the Waltz as pictured at Amazon.]

Granted, this may be more predictable than the I Am Love/Delaunay pairing, but I still think the right book combined with Woody Allen's now-out-on-dvd Midnight in Paris could make an inspired present. If you saw the comedy last spring, you know that the story centers on time traveling Gil (Owen Wilson), the 1920s Paris salon of Getrude Stein, and Lost Generation artists Scott and Zelda along with Hemingway, just to name a few.

Obviously anything by Hemingway or something on Stein, the collector, and her circle would pair well with the movie. Since I've already highlighted so many Picasso-related books, I decided to go in a different direction: painter, dancer and writer Zelda Fitzgerald. Specifically, Nancy Milford's landmark Zelda: A Biography.

Unless you live near a stellar vintage book shop, there's not much time to track down an older edition with the striking peacock feather cover, or the image of Zelda sitting on the stacked trunks, but wherever you are, you can pick up the newest edition, released last month, for around $10 at most major retailers. 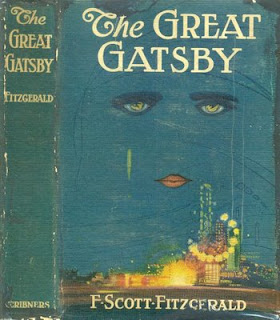 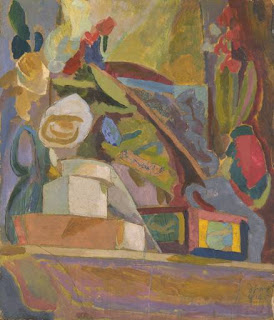 [Duncan Grant, The Mantelpiece, 1914, Oil and collage of paper laid on board
support, Tate Collection ©The Estate of Duncan Grant.]
Fast-forwarding to 2012, I do have a bit of fresh Picasso news. Picasso and Modern British Art opens at Tate Britain in February. The exhibition will look at Picasso's major impact on British painters, such as Duncan Grant, with 60 important pieces by the master shown alongside work by seven of his British admirers.
Posted by Style Court at 2:20 PM

Wonderful suggestions. Midnight in Paris is a funny and clever movie. I enjoyed watching it twice...
Happy Holidays

PoI -- thanks. Glad you like the gift brainstorm. I'm looking forward to watching MiP again this week. Happy Holidays!

PoI -- also, I thought Corey Stoll, as Hemingway, was really great. So memorable.

I'd love to read more of her work this winter. Appreciate your recommendation.

Yes to all!
Have a merry Christmas and a happy New Year!
Much love!
Victoria

I think I could watch Midnight in Paris on permanent loop! Best Woody in years, don't you think? Owen may finally be the perfect replacement for himself...And a bit of Milford/Mitford mix-up in the comments, but I'll take them both!

Jacqueline -- so happy MiP was released this week.

I decided to go ahead and ask Santa for the Milford book. After I've read it, I plan to put Zelda and Hemingway together on the shelf :)