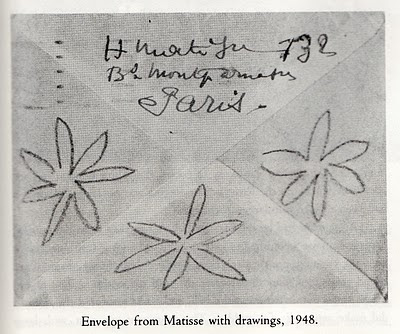 [Francoise Gilot's letters from Matisse as seen in Matisse and Picasso: A Friendship in Art.] 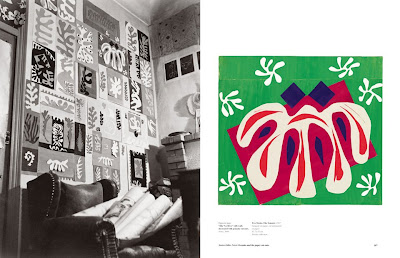 [From TASCHEN's Henri Matisse: Cut-Outs- Drawing With Scissors.]
It's New Year's Eve but Saturday, December 31 is also Matisse's birthday. To celebrate, the High is offering kids and teens age 17 and under free admission on the artist's big day and again on Monday, January 2. (Younger visitors must be accompanied by a paying adult, though.) The museum will be open until 6 p.m. both days. With a handful of Matisse's most iconic works, including Dance (1), currently on view at the High in Picasso to Warhol, it's a great time to pop in. Click here for details. 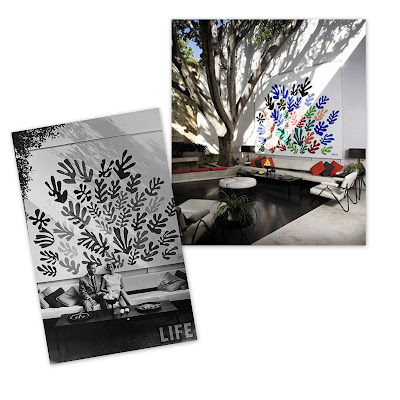 [Top right: Kate Carr photo of Matisse's monumental La Gerbe (The Sheaf) (1953) commissioned by  Sidney and Frances Brody of L.A. for their mid-century A. Quincy Jones-designed (and Billy Haines-decorated) house -- image via Christie's. Lower left: Sidney and Frances on their patio with the piece -- image via LIFE.]
And something to look forward to in 2012: LACMA will exhibit Matisse's enormous, stops-you-in-your-tracks La Gerbe for the first time alongside its full-scale maquette and other materials that tell the story behind it (you may recall that in the early 1950s art patron Frances Lasker Brody and her husband commissioned this ceramic piece for the large patio of their A. Quincy Jones-designed house where it remained, according to the late Mrs. Brody, the heart of her home for more than 50 years). 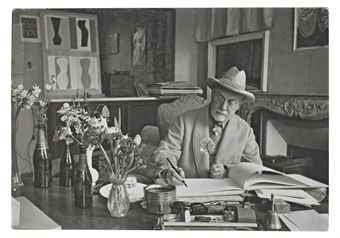 [Henri Cartier-Bresson Henri Matisse à son domicille, Vence, France, 1944 via Christie's.]
On view at LACMA beginning June 2 will be: nineteen of Matisse's original hand-painted color samples cut and sent to the Brodys during the process of the commission; original documents such as letters from Pierre Matisse, son of the artist and his U.S. dealer; Frances Brody's in-depth account of the commission written in the 50s; and again, the enormous maquette plus final piece -- recently given to the museum by Mrs. Brody. A bonus is Jazz; Matisse’s much-loved print portfolio will be included in the exhibit too.
Posted by Style Court at 7:17 PM

The Matisses at the High are what "got" me at first and I went back to see them last.

wish I were closer to Atlanta to see exhibit. Great photo of Matisse...love those bottles and interior

If you wish, a french editor, Bernard Chauveau, has now the rights to publish Matisse's stencil and screen-printing.
He is an art editor and you might like his work :
Link to website :
http://www.bernardchauveau-editeur.com/
Link for Matisse :
http://www.bernardchauveau-editeur.com/Matisse:-pochoir---serigraphie/categories_id=10/-/tous_produits.htm

PS : he also published a book of photos of a covent built by Le Corbusier : La Tourette, that I love.