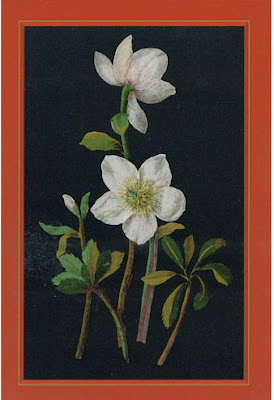 [Above, Mary Delany's Christmas Rose reproduced as a holiday card by the British Museum. Below, her Holly with Berries. Both are boxed together. Message inside reads 'Season's Greetings'.]
These cards should have been included in one of the previous two posts. 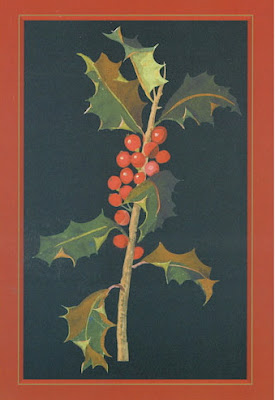 Talk about second acts. At age 72, the fashionable and terribly creative 18th-century craftswoman, Mary Delany, delved into hand-cut botanical collages (she called them “paper mosaics”), ultimately completing about 1,000 works. The Yale Center for British Art describes these pieces as "the crowning achievement of her rich creative life." And across the pond, the British Museum has reproduced a couple of them as holiday cards.

[MFA boxed cards, reproduction of 1967 (Rothko Number 1268.67), 1967 Mark Rothko (1903-1970).
Acrylic on paper mounted on hardboard panel,  Gift of the Mark Rothko foundation 1986.43.260
©National Gallery of Art, Washington.]
If you're on the lookout for something less feminine or more 20th-century, the MFA, Boston, sells a number of holiday cards based on masterworks. Many have a simple, universal seasonal greeting inside but the Rothko above is sans message.
Posted by Style Court at 8:11 PM