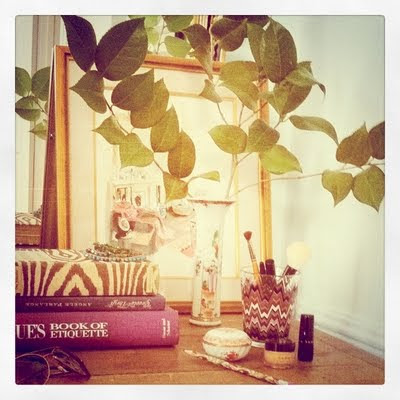 [Photo my own]
After publishing the previous post on Deborah Needleman's new book, The Perfectly Imperfect Home, I thought about some of my own jollifiers -- things that are around just to make me smile.

Children's art is probably one of the best jollifiers (as Needleman says, its own subcategory of jollifier) but what I have right in front of me is my Missoni for Target cup. Like I mentioned back in September, the colorful 'bargello' cup is unexpected for me -- something I didn't at all expect to buy but still a fun souvenir from the day I was on the scene covering Missoni mania in Atlanta. 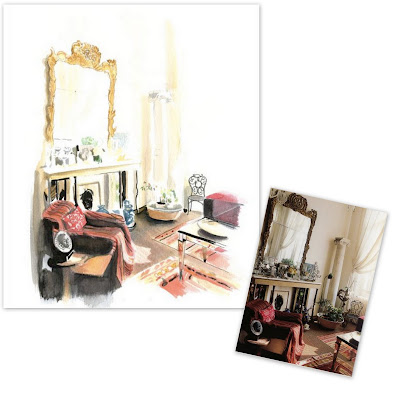 At the moment, I have it mixed with Vicky Molinelli's watercolor of LouLou de la Falaise's very layered Paris apartment. Above, you can see Vicky's work (left) and Guillaume de Laubier's photograph (right) from Dressing the Home. For a sense of history, I also have 'forever' things -- an antique chinoiserie vase from my grandparents, a small Herend box from a friend, an old mirror, and not visible in this picture, but hanging above the mirror, a graphic black and tan Picasso-esque print by my aunt. 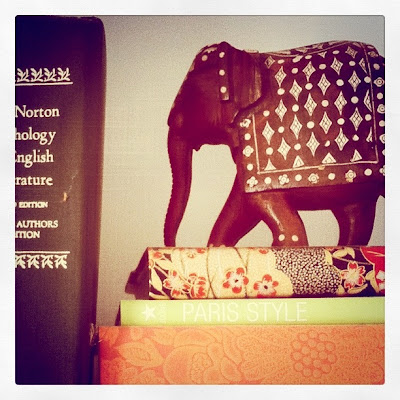 [Photo my own]
Needleman adds that small animals are terrific jollifiers too.

One of my friends, a museum professional with very refined taste, proudly hangs on to a not-so-serious commemorative Royal Wedding mug. 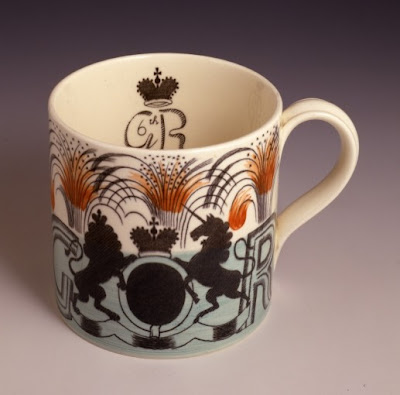 [© Estate of Eric Ravilious 2005. Image via British Council. Visit the Council and The Fitzwilliam Museum to learn more about the mug.]
British artist Eric Ravilious's design for Wedgwood, the 1937 transfer-printed earthernware commemorative Coronation mug, is actually really stylish. Although he died at age 39 while serving as an Official War Artist, Ravilious is still one of the best-known English painters of the 1930s, notes the V & A. He was involved with wood engraving, ceramic design, glass engraving, furniture design, a bit of textile design, and, of course, illustration. Next year, High Street, a new edition of the 1938 children's classic by architectural historian J.M. Richards, with color illustrations by Ravilious, is due out.


High Street chronicled London shops of the 30s encompassing wedding cake bakers, letter makers, knife grinders, and coach builders.  Sir James Richards (1907-92) was a longtime editor of the Architectural Review as well as architectural correspondent to The Times. The 2012 edition will include commentary from V & A curator Gill Saunders.

That Ravilious mug is wonderful, isn't it? A very British mix of modernism and romanticism.

Hi Courtney! I agree that animal things are wonderful jollifers. My favorites are small trays and boxes!! And, tiny pieces of driftwood make me smile. I have a John Derian Target cup with a ladybug on it. Love.