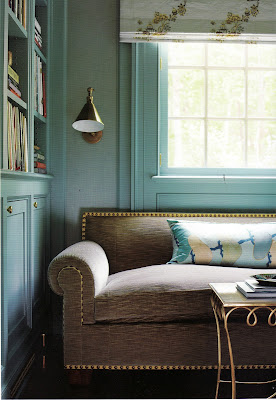 [Photo by Eric Piasecki ©Katie Ridder Rooms, The Vendome Press, 2011.]
Here's another sneak peek at next week's post about designer Katie Ridder, her life-long passion for craft (by age twelve she was already selling her own hand-stitched, finely detailed cushion-size fabric birds and fish), her new book, and her use of color and pattern. A fragment from an antique kimono was used for the long pillow, above. I love how this segment of the pattern reads like an abstract painting. 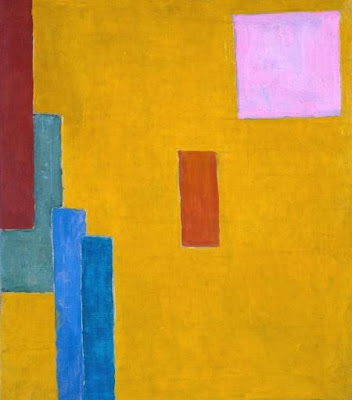 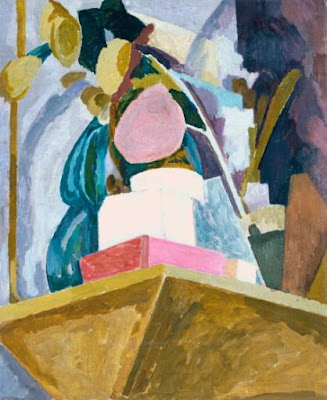 [Vanessa Bell, Still Life on Corner of a Mantelpiece, 1914 ©The Estate of Vanessa Bell, Tate Collection.]
Speaking of which, with Christopher Farr's exhibition of new limited edition Omega Workshop rugs opening in L.A. Saturday, October 22, I wanted to highlight a couple of Vanessa Bell's paintings from around 1914. (You may recall that the Farr collection draws upon avant-garde early-20th-century designs by Bell, Duncan Grant, Roger Fry and other Omega Workshop members.)

Like Ridder, Bell admired Matisse's work.  Between 1912 and 1920, her style shows a great deal of experimentation and the influence of the Post-Impressionists -- brighter, sometimes Fauve-like colors and abstract forms. 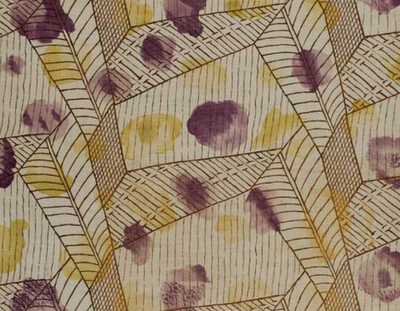 [Again, White, a printed, Bell-attributed furnishing linen from the Courtald Gallery's  2009 exhibition, Beyond Bloomsbury: Designs of the Omega Workshops 1913–19.] 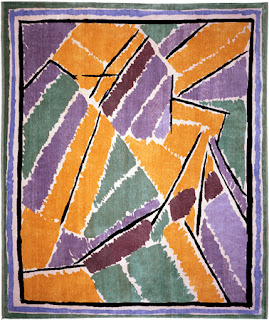 [Rug image courtesy Christopher Farr.]
Oh-so-helpful Christina at Christopher Farr's Los Angeles showroom filled me in on the rug story (there's also in-depth coverage by Peter Terzian in the October Elle Decor). Just to recap, the genesis of Farr's newest collection was the Courtald Gallery's  2009 exhibition, Beyond Bloomsbury: Designs of the Omega Workshops 1913–19.

Farr approached the Courtauld -- holder of the largest surviving group of Omega design drawings, many of which are for rugs -- about bringing the bold sketches to fruition. Matthew Bourne, Director of Christopher Farr, and Alexandra Gerstein, Courtauld Curator of Sculpture & Decorative Arts, both weighed-in and worked with a series of conservators to create rugs that are very true to the original drawings. The idea was to keep the Omega artist's lines and marks evident in these hand-knotted, hand-spun wool and mohair pieces. And as Gerstein explains in this video, the influence of African geometrics and Picasso can be seen in several of the Omega designs. 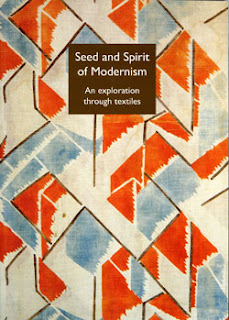 Last Bell reference: for the cover of Seed and Spirit of Modernism, textile dealer Esther Fitzgerald selected the Bell-attributed circa 1913 linen, Maude.
Posted by Style Court at 2:15 PM

I bet the Seed & Spirit of Modernism is a fascinating. You know, you post are a so educational and fun - thank you.

J --Thank you! I especially appreciate the "fun" part. Always trying to strike a balance.

And, yes, I'm adding Fitzgerald's book to my wishlist as well :)

Lovely post, I just seem to be surrounded by Bell and the Bloomsbury group. I just ordered a bunch of great books from Amazon marketplace....
And I love this era of freedom!