From India to Bloomsbury 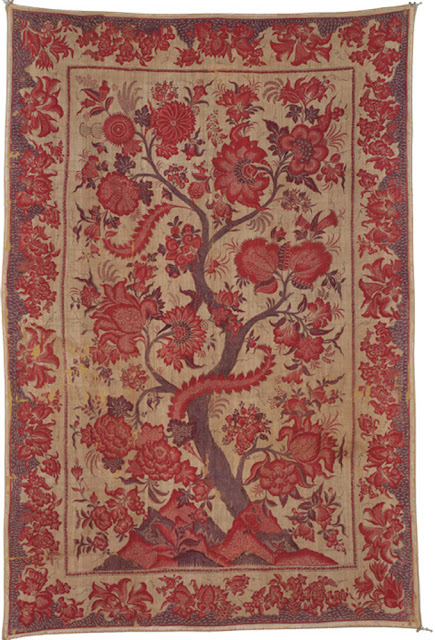 [Indian, Coromandel Coast, made for the Indonesian market. Palampore, 18th century. Image via Johnson Museum of Art.]
Thanks, Janet (Can you believe it's been a year since her wedding?) for alerting me to a wonderful exhibition at Cornell's Johnson Museum of Art -- Essence of Indian Textiles: Selections from the Parpia Collection. The show explores six hundred years of design, highlighting India's extraordinary contributions to the world of textiles with examples of hand-painted and hand-block-printed cottons, embroidery, ikat, tie-dye, brocade, and tapestry all drawn from an outstanding private collection. If you find yourself in the area, the exhibition will be on view through December 31, 2011. A catalogue is expected to be out in 2012.

And since we're talking about the Johnson Museum, I wanted to mention that the catalogue accompanying a past show, A Room of Their Own: The Bloomsbury Artists in American Collections, is currently available at a discounted rate through the Cornell University Press. I think I'm going to add it to my holiday wishlist because the book would be a perfect companion to Beyond Bloomsbury. 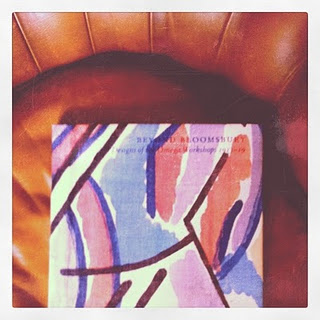 As the exhibition title suggests, the show organized by the Johnson with assistance from the Nasher Museum of Art (it actually premiered at the Nasher in 2008) looked at American interest in Bloomsbury work. For a long time, Americans were mainly familiar with the literary output of Bloomsbury members; the art, in contrast, was not widely known over here at all. In the last third of the 20th century, though, Bloomsbury ceramics and paintings caught on with collectors. (Kind of a random connection but, for my own part, I'll add the Laura Ashley influence; some of you may remember that a few weeks ago I referenced 1980s girl bedrooms and Laura Ashley's Bloomsbury collection.) 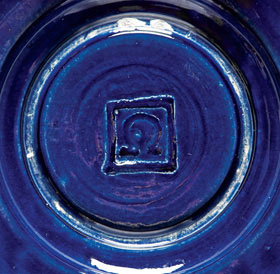 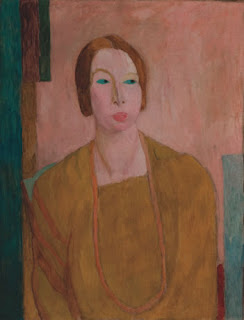 [From Steve Moyers writing for Humanities, March/April 2009 Volume 30, Number 2: Vanessa Bell’s 1915 rendering of patron of the arts Mrs. James Hutchinson was an early tremor in the modernist artquake that had its first rumblings during the 1910 Post-Impressionist exhibition, organized by Roger Fry. Shown above, Portrait of Mary St. John Hutchinson, 1915. Oil on canvas, 31 x 21 3/4 inches, collection of the Cornell Fine Arts Museum, Rollings College, gift of Dr. Kenneth Curry, Phd, R. ’32.]
Check out the microsite here. Later in the week, I'll be posting a reminder about a related upcoming show at Christopher Farr's Los Angeles showroom, 748 N. La Cienega Blvd. For more on Bloomsbury and the Omega Workshops, click here. Find Bloomsbury members at the Tate here.
Posted by Style Court at 2:19 PM

this year has FLOWN by and certainly more so for Janet and her gentleman!