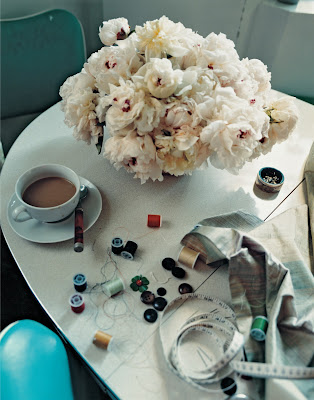 [Unless otherwise noted all images in this post ©Oberto Gili from Home Sweet Home: Sumptuous and Bohemian Interiors, Rizzoli New York 2011. Posted with permission from the publisher. Above, Soledad and Alessandro Twombley apartment NYC. Please click to enlarge.]
Many serious design junkies -- those of us who've poured over a lot of shelter mags and photography-filled books, both new and old -- can often guess the date of even the most timelessly furnished, uncontrived, anonymous room. Well, what I mean is guess the decade (or part of the decade) in which the room was photographed. Everyone seems to agree that the flower arrangements are usually a giveaway, but sometimes it's the styling of the pillows, pictures, or other objects. So, I surprised myself when, mid-way through photographer Oberto Gili's large-scale new book, I realized I wasn't aware of time at all. (Ironically, with a layout that reminds me a bit of Horst's iconic interiors volume, each house, apartment, or artist's studio is in fact introduced simply by name of the occupant and date of Gili's photos but I was engrossed in the images and didn't notice the dates right off the bat.) 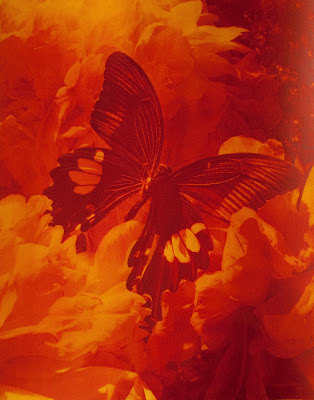 [©Oberto Gili. Please click to enlarge.]
I guess loosing my sense of time was Gili's intent. In the preface to Home Sweet Home: Sumptuous and Bohemian Interiors, he paraphrases Saint Augustine:

...we understand time through memory (the past), attention (the present) and expectation (the future). Time itself doesn't exist.

Gili goes on to say that every image he chose for the book represents the memory of a great experience. The photographs span thirty years of editorial work for magazines including House & Garden, Vogue, and Town & Country, and reveal the private domains of art, architecture and design luminaries with very divergent tastes: Mary Randolph Carter and Howard Berg, Richard Meier, Soledad and Alessandro Twombley, Renzo Mongiardino, Paul Fortune (as noted in an earlier post, Fortune's Laurel Canyon place, circa 2003, is a new favorite of mine thanks to this book), Jacques Garcia, Milly de Cabrol, Anish and Susanna Kapoor, Ellsworth Kelly -- I shouldn't have started mentioning names because inevitably I'm leaving out too many fascinating figures.

In short, there are thirty-five European and American homes and studios described by Gili as having made an indelible mark on him and contributing to the evolution of his taste, his life, and his thinking. Added to these editorial picks are numerous poetic shots of his own place in Italy as well as his recent fine art photography -- nature-fantasy pieces, such as the butterfly/botanical above, inspired by a 1940s natural history book, Andre Grangeon's Mon jardin, monde enchante, given to Gili at age five by his mother. 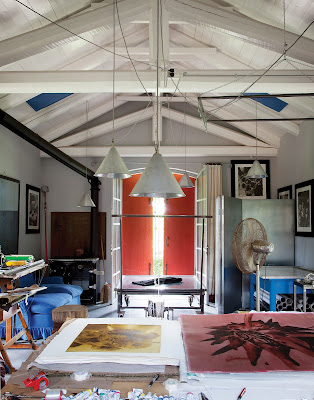 [Gili's Piedmont studio with big red doors opening to the garden.]
Ever since I saw Gili's fine art photography hanging in Nathan Turner's home (domino December/January 2009), I've been interested in it; finding plenty of full-page examples in the book made me smile. 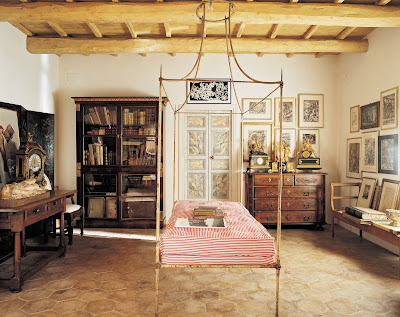 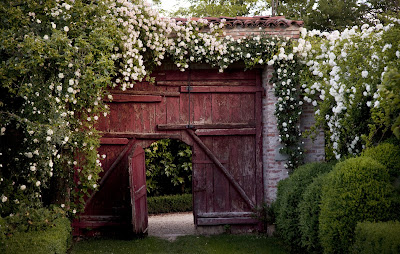 [Above, roses abound in Gili's garden; Below, the book open to Milly de Cabrol's apartment.] 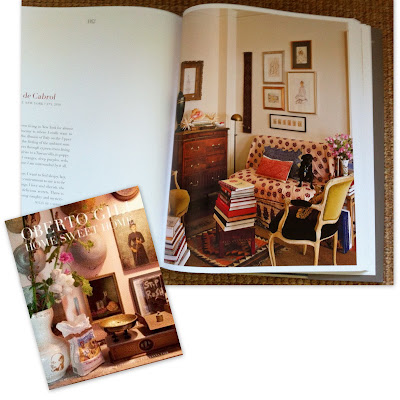 [iPhone picture mine, not that a caption is needed.]
Some of the interiors have a decidedly Old World feel while others (as you can imagine from the list of names I mentioned) are incredibly pared down and modern, but even the latter are object-driven. Maybe it's only one object, yet it feels personal. Gian Enzo Sperone says his house is a place where he can express his aesthetic needs.  That seems to be a unifying theme throughout the book. The first time you flip through it, keep one hand covering up the dates and let yourself get lost in Gili's beautiful images.


For this book preview I had access to a review copy from Rizzoli. As always, I have no affiliation with the publisher or author. Hope you enjoyed the peek inside.
Posted by Style Court at 9:59 PM

This is a book I will definitely buy. The photos by Oberto Gili that you included are beautiful and the interiors do seem timeless. The quote about time from St. Augustine is very true. Thanks for letting me know about "Home Sweet Home." Can't wait to own it; I'm sure It will be a source of inspiration and beauty.

I could absolutely lose myself in Sperone's country house! Especially that wonderful room full of prints.

I've always loved his photography. Somewhere I remember seeing some pix of his own house (WoI??) which was as interesting as I anticipated. Alas the book is not at B&N yet and I had a discount coupon, so I consoled myself with the new Jeffrey Bilhuber — which is a very nice consolation prize. Much better than his previous book.

Gili's house is fascinating! The book should be out in stores in 3 days I believe. Don't you hate it when coupons don't come at the right time? Although the Bilhuber latest looks great :)

I spend a weekend with it...not enough time! Oberto, my good friend, allowed me to feature his nyc apt in my Perfectly Kept House is the Sign of a Misspent Life and how nice of him to return the favor! It is the timeless home scrapbook of all time. can't live without it...or his incredible lens!
Imperfectly,
Carter