Another Passage to India (and Points Beyond) 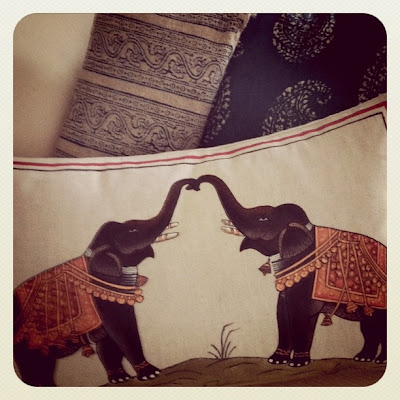 [Not so stellar photo my own.]
The block-printed pillow on a friend's sofa; the flowering branch wallpaper in a favorite aunt's dining room; the black lacquer coffee table in your neighbor's living room; the densely-patterned Turkish rug on your floor: For many of us in the West, Eastern-inspired design has been so deeply woven into our everyday lives for so long that we hardly think of it as exotic. 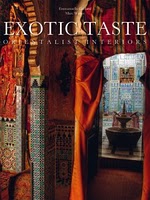 But 400 years ago, freshly glazed and printed cotton from India and handpainted wallcoverings from the Far East were shockingly new -- and incredibly enticing -- to Europeans. 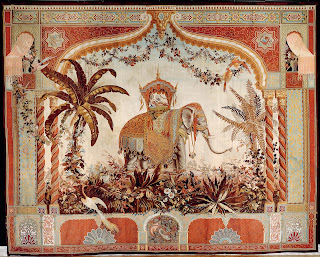 [Sallandrouze Factory, Asia, tapestry after Jean-Baptiste-Amédée COUDER, 1844 the Louvre's collection, currently published in Exotic Taste: Orientalist Interiors, The Vendome Press 2011. Click to enlarge.]
In her very comprehensive book, Exotic Taste: Orientalist Interiors, art historian Emmanuelle Gaillard takes us back to the beginning when Europeans and Americans first clamored for never-before-seen textures and hues imported from the East. And she follows the story through the centuries as Westerners began to reinterpret these Eastern styles to suit their own aesthetic.

Fingertips caressed the lightness of printed fabrics, taste buds became used to the exotic flavours of sugar, coffee and chocolate, eyes now craved the gaiety and vivacity of colour in domestic rooms. ...new materials became de rigueur; printed calicos were all the rage...; paper became a decorative feature in its own right in the form of wallpaper. 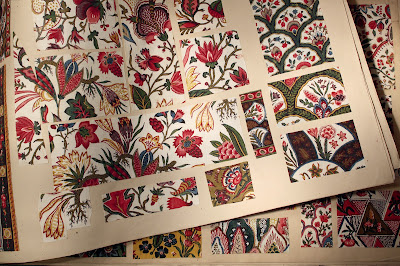 [Chinese Fans, samples of 18th-century woodblock-printed cotton. Details follow below. Photography and graphic design by Marc Walter © Exotic Taste: Orientalist Interiors, The Vendome Press 2011.]
In the early years of this blog, we spent a lot of time on chinoiserie (a broad style inspired by Chinese, Japanese, and other Asian art and design -- in short, a Western spin on the Asian aesthetic). So, not surprisingly, I appreciate Gaillard's expansive section, The Arts of China and Japan. Even if you already have numerous chinoiserie-related tomes on your shelves, I think you'll enjoy her overview coupled with Marc Walter's graphic design. But what I really like is having substantial coverage of India's influence, along with The Splendour of the Near East, all together in one volume.

I wanted to share with you some of my favorite details. For a better sense of the interiors highlighted in the book, check out architect Stefan Hurray's review.

Image four, from the top, shows 1790s fabric samples -- block-printed cotton known as Chinese Fans -- made at the Jouy factory in France. Although the French referenced China in their name for interlocking motifs, imbrique chinois, the design actually originated in India. According to Gaillard, Jouy's phenomenal success stemmed from two classics: indiennes (polychrome motifs of stylized flowers copied from Indian designs) and mignonettes (a type of indienne with small, very dense patterns). Perses, textiles with lush composite flowers, imaginary birds, and multicolored butterflies were for customers with ample funds to spend. And, yes, in the beginning they were intended to be furnishing fabrics but later were sought after for dresses. BTW: these samples belong to Musée de la Toile de Jouy. 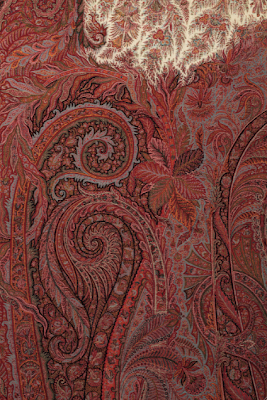 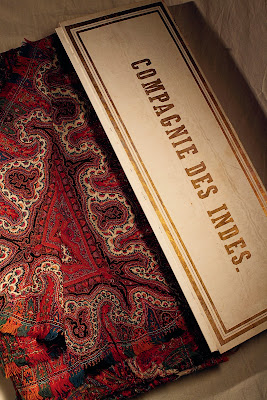 [From the Musée Galliera-Musée de la Mode de la Ville de Paris, a late-19th-century Campagnie des Indes shawl in its original box. Photography and graphic design by Marc Walter © Exotic Taste: Orientalist Interiors, The Vendome Press 2011.]
If this past post, or this one, stirred your curiosity about the origins of paisley, I think you'll appreciate the detailed background Gaillard provides, again, along with Walter's gorgeous images. 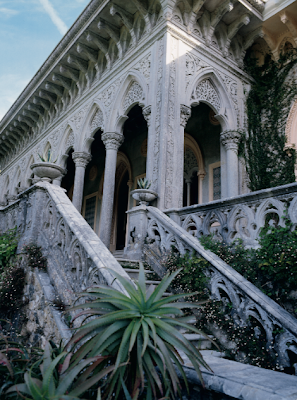 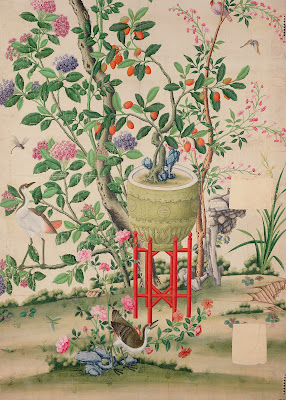 [China, circa 1810-30, now in the Victoria and Albert Museum. currently published in Exotic Taste: Orientalist Interiors, The Vendome Press 2011.]
Of course, I can't end without at least one example of Chinese wallpaper made for the Western market. 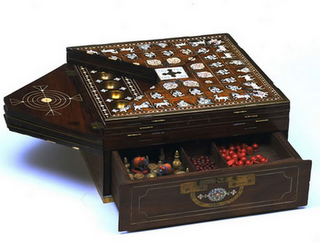 I always love the fabulous prints and colors that you share. Thanks Courtney always for the interesting and insightful posts!

The picture of the Moorish and Indian-inspired Monserrate Palace in Sintra Portugal is so exotic, a wonderful piece of Architecture.

A copy of this magnificent book just arrived in my mailbox and I am hoping to have my own review shortly. There is just so much packed into those pages, it is hard to know where to begin. (That paisly shawl is just divine, btw.)