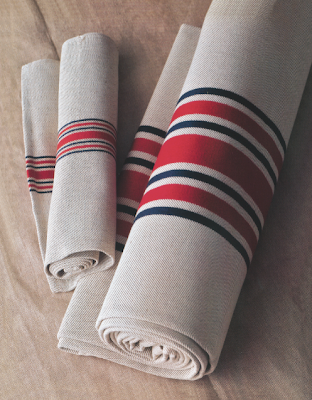 [Photo: J. Boulay from The Book of Fine Linen ©Flammarion: Paris 2011. Posted here with written permission from the publisher.]
Soon I'll be sharing some thoughts on Francoise de Bonneville's updated edition of The Book of Fine Linen, but in the meantime, here's a tiny peek inside. Shown above are pieces of sayal, or cotton-and-linen serge, woven with seven bands corresponding to the seven Basque provinces. Although these examples are revivals made in France by Jean-Vier, de Bonneville explains that the sayals are based on old Basque country traditions. Four colours–blue, red, green and yellow–were traditionally associated with four big annual holidays, and the relative width of the decorative bands was once an indicator of a farmer’s prosperity. 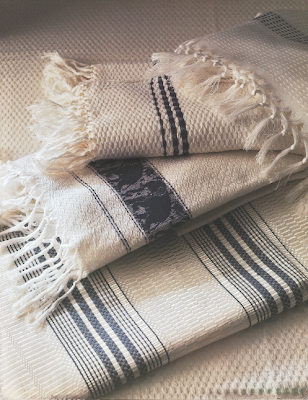 [Photo: J. Boulay from The Book of Fine Linen ©Flammarion: Paris 2011. Posted here with written permission from the publisher.]

Of course, in addition to my obsession with stripes, I also have a rustic fringe fixation. According to de Bonneville, the bands of dark blue decoration and knotted fringes on these towels make them near replicas of medieval models: "Some of them have an alternating mat-and-glossy cotton weave. To prevent the fringe from getting tangled in the wash, the towels should be placed inside a pillowcase before going into the machine." 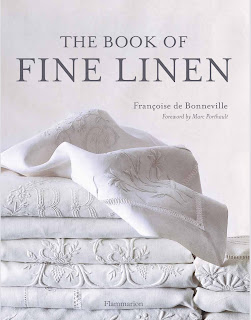 I love so much old linen . This book sounds wonderful