Bloomsbury: Back to the Future 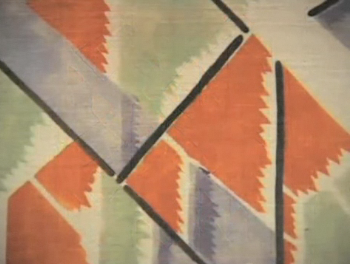 [Printed linen, Maud, named for Lady Maud Cunard, as seen in the 2009 exhibition, Beyond Bloomsbury: Designs of the Omega Workshops 1913–19.] 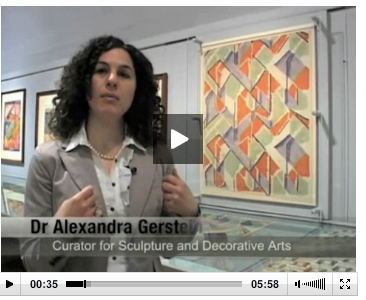 [Courtald Gallery's Dr. Alexandra Gerstein stands before the printed linen, Maud, discussing Beyond Bloomsbury: Designs of the Omega Workshops 1913–19.]
Have you had a chance to flip through the October Elle Decor? Maybe you noticed Peter Terzian's nice piece about Christopher Farr's new limited edition collection of rugs inspired by five never-produced Omega Workshop designs. Terzian's story prompted me to revisit the Courtald Gallery's  2009 exhibition, Beyond Bloomsbury: Designs of the Omega Workshops 1913–19 (this show was sort of the seed that grew to be Farr's collection).

If you were a toddler, little girl, or teen in the 1980s with any fabrics from Laura Ashley's Bloomsbury collection (I had Emma curtains) then, in a way, you were living with the tangible results of Roger Fry's endeavors. Early 20th century English art critic and painter Fry was interested in bringing the fresh look of contemporary avant-garde European fine art (think Matisse and Picasso) into the everyday lives of Brits (not so unlike what Sonia Delaunay and Vera Neumann did later with textiles). To that end, he founded in 1913 the Omega Workshops, a highly experimental design collective including Vanessa Bell, Duncan Grant and other artists of the Bloomsbury Group. 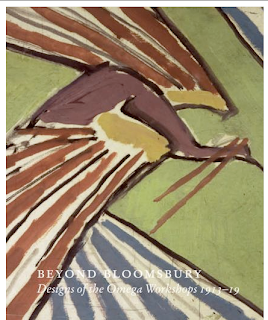 Many of the decorative pieces -- and ideas for pieces -- that came out of Omega before 1919 show the influence of Cubism, Fauvism and African textiles.  Courtald curator, Dr. Alexandra Gerstein, explains this in detail, here, and shows an example of an early rug that was produced.  While the past exhibition doesn't have a complete microsite, I was happy to find so many resources still available through the museum's main site. Check out the modestly priced catalogue here. Also, in issue 28, Selvedge covers Vanessa Bell's affinity for textiles.
Posted by Style Court at 1:18 PM

i obviously use fabrics to warm up a space but unlike art and objects, i never really thought of their history. thanks for sharing this!