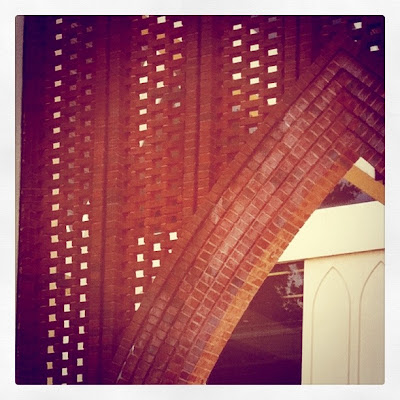 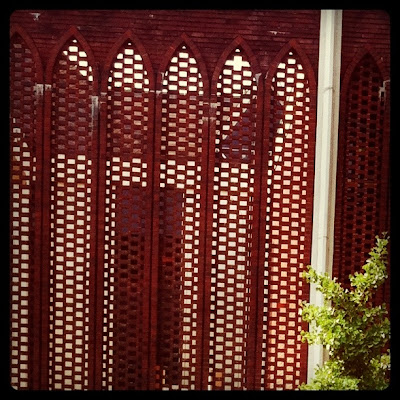 But I bet when Dana was very new, during the late-1960s through early 70s, a few paisley-clad art students passed through the arched entry of its two-story brick screen. It's that psychedelic Victorian-inspired paisley I want to address next.

The detailed, 21st-century pictures of Portman's mesh-like screen I include as a follow up to this (and this, too). While the archival images in the 2009 post show the sleek side of the architecture, I hope my casual snaps convey the soft balance provided by the screen. Not only is it wonderful to see the play of sunlight, but also the airy, geometric pattern of bricks as a foil to the dense, curving magnolia branches. And I really have started documenting my world in the spirit of Sylvia Drew; Dana is just one part of it. But no watercolors yet -- so far I only have photos. 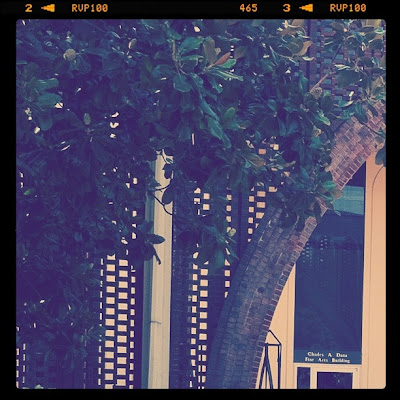 I visit the area twice a week and make a point do drive by Dana at least once a week. It's interesting inside and out with rewards for repeat visits. I love that some of the facade has lattice brickwork; other parts of the face black bricks substitutes for the holes. I always do a double take: where do the holes end and black bricks begin? Inside it's light, open, spacious, and it makes me want to explore.

Terry -- I should've included an image from the other side of the wall. Love your take on it, as always.