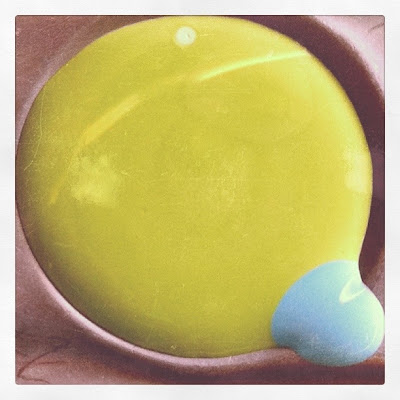 [Photo my own]
Think of places identified by color. High profile examples include Atlanta's Neel Reid- and Philip Shutze-designed Pink Palace, the Green Room at 1600 Pennsylvania Avenue, and tastemaker Nancy Lancaster’s luminous buttah yellow London drawing room. The architecture may be significant, or the interiors might be comprised of many splendid, pedigreed objects and visually arresting works of art—Henry Ossawa Tanner's Sand Dunes at Sunset, Atlantic City currently hangs against verdant silk-covered walls in the White House parlor—but first-graders and scholars alike identify these digs most readily by color. Few decorative elements are as primal and accessible.

Patrick Baty has spent decades immersed in color (paint, to be specific). A respected color historian and the owner of London's Papers and Paints, Baty knows color so well that he received a Royal Warrant of Appointment to Her Majesty The Queen. This summer, I was invited by Enfilade editor, Craig Hanson, to interview Baty and it was fascinating to learn more about his complex work. If you're curious, too, please grab an iced coffee (or iced tea) and check out the piece here.

As Enfilade focuses on the 18th century, my questions emphasized the distant past but it's important to note that Baty's historical consulting encompasses the 20th century as well. Fans of the 1960s might want to look at this.
Posted by Style Court at 8:24 AM

Historical colour research is so important - our ideas about what colours things had in the past is often so skewed by later reinterpretations - and Baty is a major practitioner in this field. I look forward to reading the interview.

Although I am not an expert of paint analysis, I have worked with U.S. leaders in the field. Once, with the late Alan Kemper, we went to an early house that was operated as a museum and they were very proud of the unconventional pink painted woodwork in the principal room. They had carefully scraped away the "grime" which we discovered by looking at a saved patch with bright lights to be the original grain painting. They had revealed the undercoat, unwittingly destroying the original finish! Mr Baty is correct in that so much depends on knowledge and interpretation, not just science and technology.