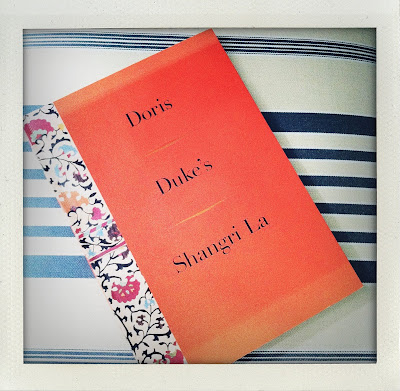 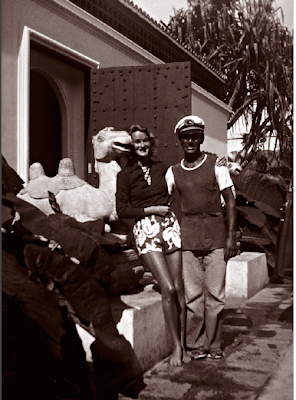 [Doris Duke with surfer and musician Sam Kahanamoku at the entrance to Shangri La, circa 1939. Photo copyright The Doris Duke Charitable Foundation.]  ]
Coleen Rider's beautiful 1940s hand-tinted photograph of Diamond Head has me daydreaming about Hawaii. So I decided to flip through my copy of Doris Duke's Shangri La.  Remember this pretty book? Back when I was preoccupied with Duke's suzani collection, I seemed to mention her Hawaiian digs, Shangri La, every other day.

Inspired largely by art and architecture the 22-year-old Duke saw in India and the middle east during her 1935 globe-trekking honeymoon, the house is a highly personal blend of styles from the East Coast, Hawaii, and the Islamic world. And it was continually refined by Duke, a passionate and original collector, over many years. Today, it is a cultural center open to the public. 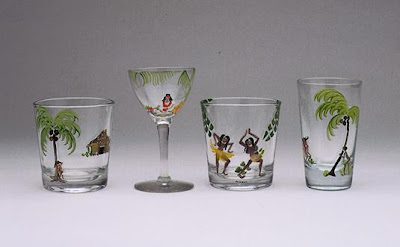 [Photo by Shuzo Uemoto copyright Doris Duke Foundation for Islamic Art.]
Although the collection housed inside is most notable for its old Islamic and Southeast Asian pieces, I thought on this steamy July day it would be fun to highlight Duke's vintage, circa 1940, locally hand-painted barware from her Playhouse kitchen. Activities depicted include surfing and hula dancing. 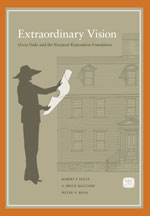 Over at the Honolulu Academy, I noticed a newer book, Extraordinary Vision, about Duke's preservation work in Newport, Rhode Island -- one of the largest preservation projects ever completed in the United Sates. In 1968, she founded the Newport Restoration Foundation, a group credited with saving 80 historic early buildings. Bonus features of the book include an illustrated glossary (helpful in understanding house styles and architectural elements) and a removable map for neighborhood walking tours. 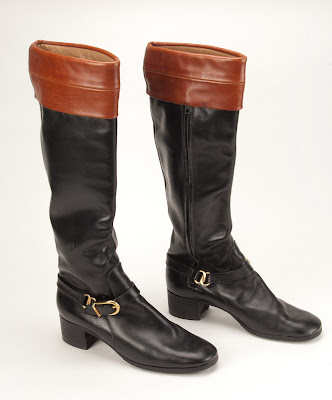 [Gucci boots and surf board images via Dressed to Play: The Sporty Style of Doris Duke.] 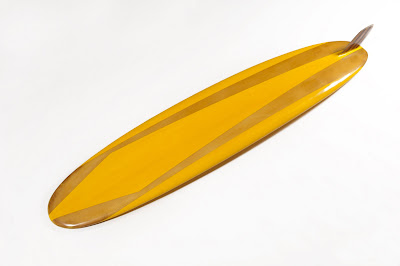 Her 1968 Gucci riding boots and Velzy Surfboard, circa 1960 (made of then-revolutionary foam polyurethane and fiberglass) are currently on view in Dressed to Play: The Sporty Style of Doris Duke. The show can be seen in the galleries at Duke's East Coast house, Rough Point, through early November 2011. Duke enjoyed using the innovative board at Shangri La,  and according to exhibition curators, the creator, Dale Velzy, is believed to have opened the first conventional surf shop in California in 1949.
Posted by Style Court at 2:20 PM

i don't know if i have told this year yet....
you post THE MOST interesting post.
i always am enriched.

I had the great pleasure of talking with her in the late 1980s about a project for the New Jersey estate, which unfortunately was not realized. But she was a fascinating individual and those in her circle were almost as colorful as she was.

John -- I'm endlessly intrigued by the people you've encountered in your career. What an incredible journey.

Glad you think so! It's still scorching right now.

Tim Street-Porter just photographed her Hawaii estate for a new Rizzoli book which will also accompany a traveling exhibition based on the house. It will be out in Fall 2012.