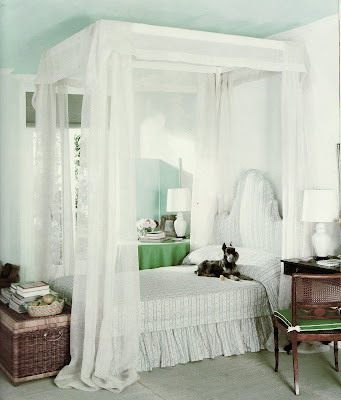 [Photo: Ernst Beadle/Vogue ©1959 Conde Nast Publications Inc. as seen in Albert Hadley: The Story of America's Preeminent Interior Designer.]
Maybe the history buffs out there recognize this room as Albert Hadley's 1959 creation, designed at the request of Vogue's decorating editor, Allison Bisgood, for the Summer on a Shoestring story.  Sometimes when I look at it, I see a fictional, decades-spanning family saga. In a house by the sea, this is the teenage/young adult daughter's bedroom. And, I imagine, with each generation it changes a bit. Not too much, though.

(Side note: Because Hadley's design is so enduring, I was asked just a few years ago to replicate the mid-20th-century room using contemporary and vintage finds. Although my original assignment changed and I ultimately wrote about a different bedroom, I still tend to dissect Hadley's interior.) 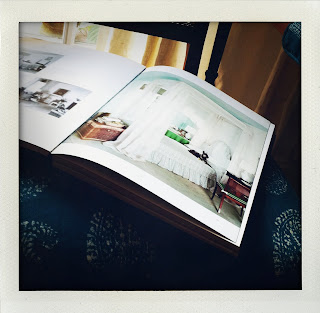 The room is a lot like a timeless little summer dress. You know, the ones that can be found in all sorts of shops ranging from the priciest to the most budget-friendly and then accessorized according to your taste. For me, the core elements are the "porch blue" ceiling that plays against the pops of apple green, the room-within-a-room bed formed by the gauzy white bed hangings, the trunk, and the caned chair. 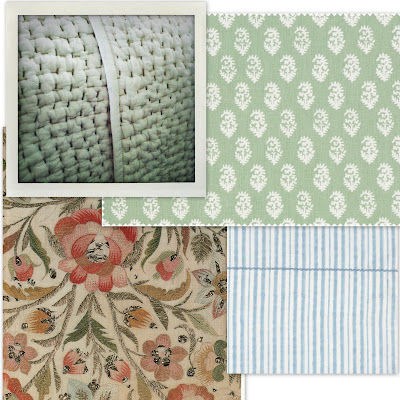 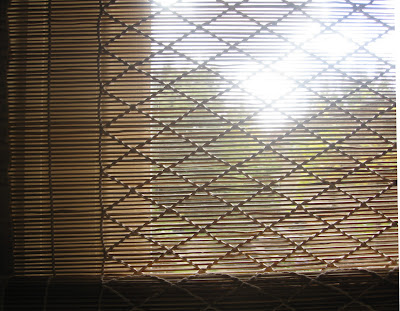 Playing set decorator, I pulled together different textiles for post-1950s occupants. I envisioned keeping the furniture, translucent white curtains and paint colors the same but freshening up the fabrics with the changing decades. Going in a well-traveled boho chic direction, I thought of Ottoman-inspired embroidery for the headboard. The floral shown above is a late 18th or early 19th century example from the Textile Museum. Also shown: John Robshaw's white cotton voile hand-stitched coverlet with sand threads and his Gent's Stripe light indigo sheets and pillow cases; Peter Dunham's hemp-cotton Rajmata; and Joss Graham's hand-woven bamboo Chik blinds. 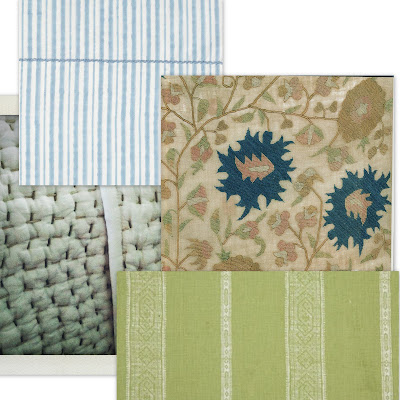 Here, above, the bedding is the same but I've made two switches: an early-18th-century linen and silk thread Ottoman embroidery from the Textile Museum and Carolina Irving's Patmos Stripe Reverse. 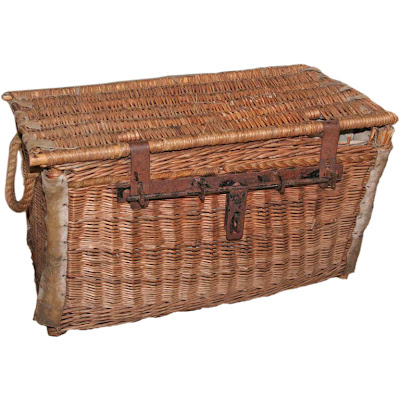 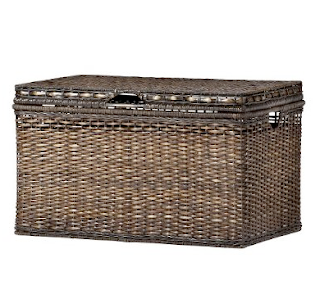 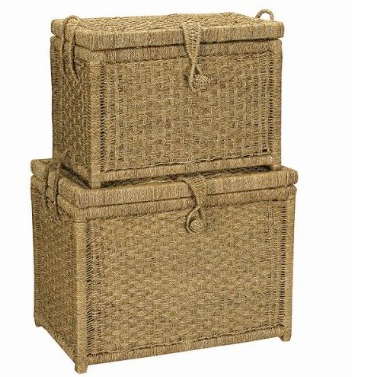 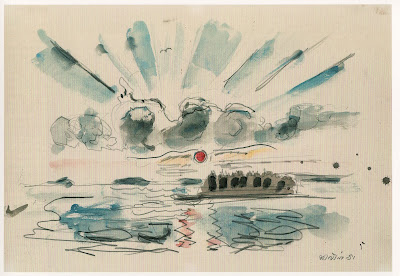 [For the bedside, a fantasy pick: John Marin's small Sunset, Mark Island, 1951, Watercolor with touches of blotting and graphite, collection of Edward McCormick Blair from the High's Marin exhibition catalogue.] 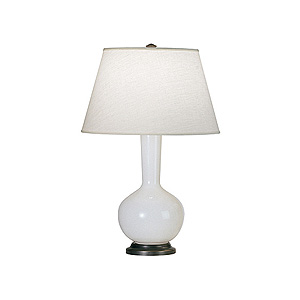 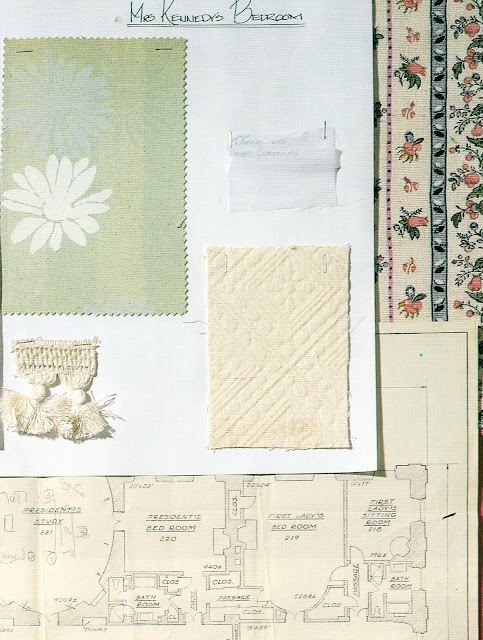 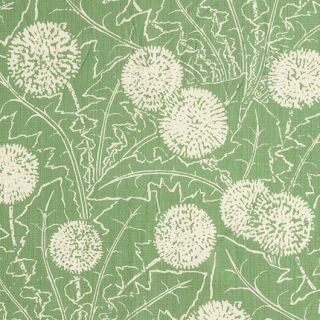 And I can't help returning to favorites like Irving's Palermo and Lucknow. 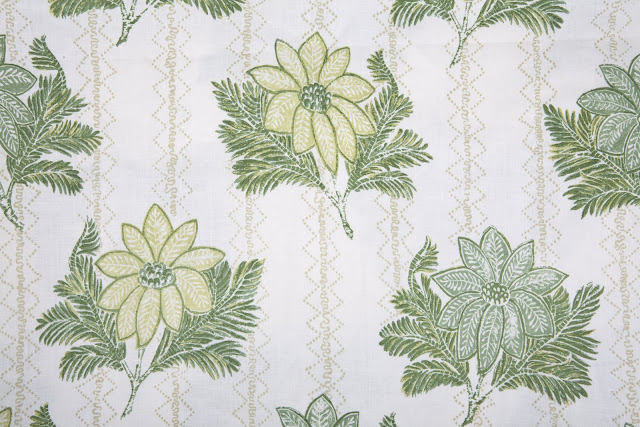 Since Rikshaw Design is no longer just for tots, don't forget to inquire about fabric available by the yard. 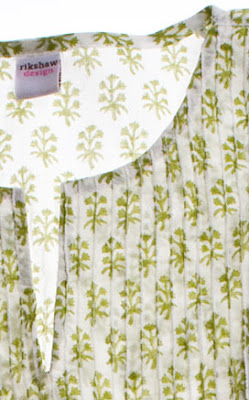 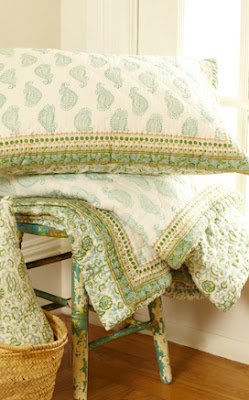 To learn more about Ottoman embroidery, check out this online exhibition over at the Textile Museum. John Marin's Watercolors: A Medium for Modernism continues through September 11, 2011.
Posted by Style Court at 2:24 PM

Courtney, I think this Pre-Sister design is notable for its time. And I wonder if it was the last time the same fabric was used for the headboard, coverlet, and bedskirt in an A.H. interior? The pattern reminds me of an 18th century design so popular in Sweden, but also France, and England, too, for that matter. The sheer fabric for bedhangings was a favorite of A.H., to be used many times again. But the real story for me here is the flooring. Do you think it is rolls of bleached woven straw matting?

John -- I agree about the flooring. It appears as if it might be a natural material. If you click on the image you can get a good close up view of the fabric too. Now we'll be analyzing subsequent Hadley beds :)

This was such an inspiring post Courtney! I loved every bit of it and you topped it off with such wonderful modern resources (Hello?! the wicker trunks/chests from Target?! So, so great). Thanks, as always, for making my morning! Haskell

Haskell -- So glad you liked it! I thought the rope-y knots on the Target trunks were pretty cool!

This has to be one of my favorite posts you have written lately. I keep reading it over and picking up more each time!

Just beautiful. I can see where your curtain inspiration is coming from. I adore the pale green ceiling and white walls of the Hadley room.

A Dance With Grace said...

Such a great post! I just came across your blog and love it. Thanks for the inspiration! :)