Textile of the Day 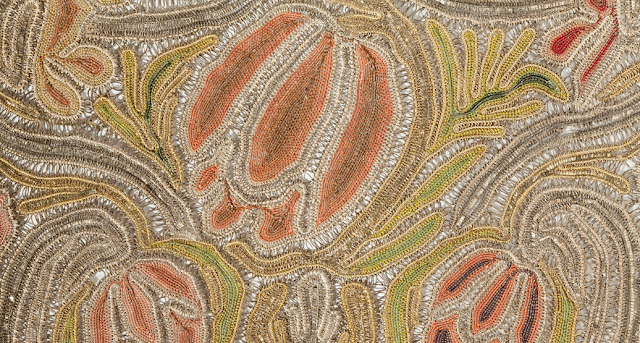 [Detail view: Italy or Spain, Cover, circa 1650, textile, silk and metallic thread lace, 53 x 69 1/2 in. Costume Council Fund (M.87.112.6) Costume and Textiles Department, LACMA.]
Despite the rash of lace-related posts, I have ambiguous feelings about the textile. Well, not really conflicted thoughts about the textile itself, but about how it's used. In terms of fashion, in the hands of Oscar, Ralph, or of course Sarah -- dressed down, haute hippie or incredibly refined -- I love it. And I can appreciate it on certain bed linens. Still, it's not something I'd typically think to decorate with. 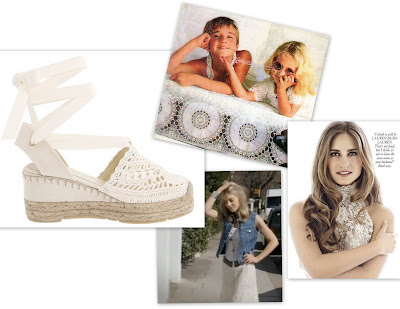 [Clockwise from the left: espadrille Ralph Lauren ; magazine image clipped by me, source lost -- Tokyo Jinja, who also saved the picture, says it is from a story produced by Carolyn Sollis and photographed by Jean Pagliuso; Lauren Bush photographed by Douglas Friedman wearing Ralph Lauren, Harper's Bazaar May 2011; video still from Bazaar UK.]
In an old Metropolitan Museum of Art Bulletin article, dated 1958, curator Edith Appleton Standen wrote that lace was once valued as something grand rather than girlie or granny (more specifically she  noted that lace later came to be perceived as sweet and trifling and associated with elderly ladies). To make her point about the change in attitude, she illustrated her article with an Old World portrait of a man clad in knightly armor and a lace scarf, and she referenced Grinling Gibbons' 17th-century carved limewood cravat. 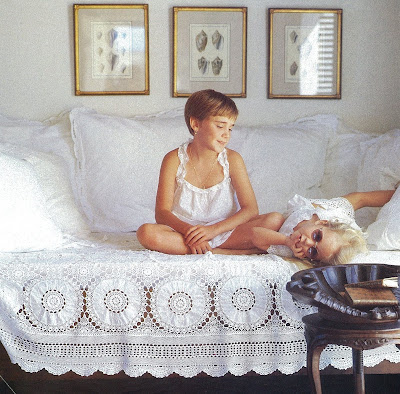 [Image courtesy Tokyo Jinja, photography by Jean Pagliuso.]
I guess the fussy association is stuck in my brain, too. The reason the relaxed picture of the two little girls keeps appearing in my posts is that I have nothing else quite like it -- breezy, beach-y, timeless, not too precious (and yes, probably cotton crochet).

Today, though, I came across a piece of lace which was a revelation: a multicolored 17th-century cover, in LACMA's collection, believed to be for a bed or table. 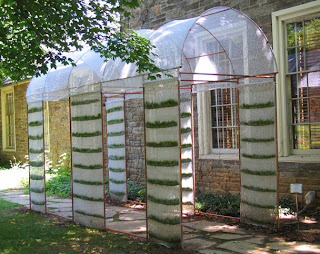 I also think Michele Brody's Arbor Lace installation is interesting.  In June, as part of the 2011 Celebration of Textiles and in conjunction with the Textile Museum's exhibition: Green: the Color and the Cause, Brody will install a living sculpture like the piece above.

And an update to my Royal Threads post, courtesy Janet and Thistle Threads. See the team behind Catherine's lace here.
Posted by Style Court at 8:36 PM

Courtney-
I realized I have an alternate version of the lace settee photo - Same issue, same photo shoot...
http://tokyojinja.files.wordpress.com/2011/04/cummins-house-hg.jpg

Jacqueline -- What a great start to my Friday! I love it and can't thank you enough!

An amazing textile but I agree with you -generally too fussy for me personally. I'm always amazed by the work that goes into it though.

Like most things, in good measure. Lace can be delightful, especially when used in unexpected ways. Love these examples.

Excuse me, but my age is showing. I loved lace as a young girl and still now at 61. Love the contrast of lace with cotton duck or burlap. But my most wonderful lace memory is of a six year old tomboy who was a friend of my son's. They were invited to a going away party for their teacher. She showed up in football jersy with a lace camisole showing a bit. She pulled on the lace and declared, "My mom made me dress up!"

I absolutely love lace in fashion and I'm learning that I'm drawn to crochet. When it comes to rooms, I'm with both Stefan and Janet: depends on the use but I always admire the craftsmanship -- craftsWOmanship :)

Clearly I'm attracted to the laciness of the daybed coverings shown here. I love hearing others' reactions.