Learning from the Masters: Getrude Jekyll 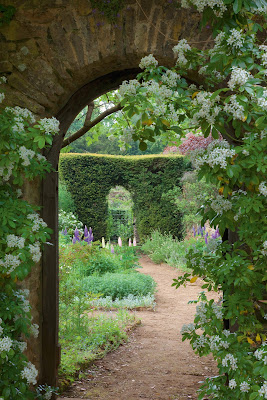 [All images in this post ©Country Life Picture Library from Gertrude Jekyll and the Country House Garden, by Judith B. Tankard, Rizzoli New York, 2011.]
A quick flip through my inspiration file reveals a common thread: I'm drawn to rooms that open up to gardens -- even if it's simply the illusion of a garden, like a tiny patio laden with potted plants. When a local warehouse conversion to residential lofts grabs my attention, it typically has an unexpectedly lush courtyard, such as Studioplex's tree-and-shrub-filled space; my weakness is buying fresh flowers and new plants; and I gravitate to places hidden behind green walls. That said, I know very little about garden design. Truth be told, almost nothing. 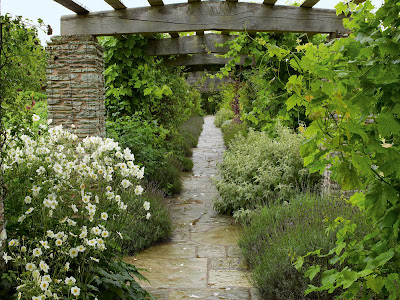 Somewhere along the line, though, I learned the name Gertrude Jekyll and have long been aware that she is a key figure in the history of landscape design. 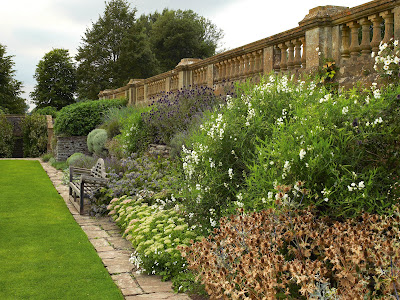 Born in 1843, in London, and raised in the English countryside, Jekyll grew up to create gardens throughout the UK and abroad but she is most closely associated with English landscapes. As an Anglophile, I jumped at a recent opportunity to preview landscape historian Judith Tankard's new book, Gertrude Jekyll and the Country House Garden, scheduled to hit book shops any day now. 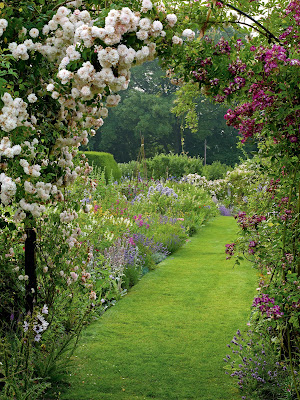 Best known during her lifetime as a writer -- specifically as a longtime contributor to Country Life and as a prolific author of garden books -- Jekyll would probably be pleased by my curiosity. She wrote:

"I have lived among outdoor flowers for many years and rejoice when I see anyone, and especially children, inquiring about flowers, and wanting gardens of their own."

Tankard says that Jekyll's books caught on with the public because the volumes had a literary and visual flair that set them apart. Art and design had always been central in Jekyll's world. Her earliest aspiration was to be a painter and she attended the South Kensington School of Art, going on to pursue crafts including: carpentry, gilding, wood inlay and metalwork. She was among the first amateur photographers, she embarked on embroidery designs for the Royal School of Needlework, and she experimented with textile and wallpaper design.

This creative background is often cited in descriptions of Jekyll's gardens. Her style is said to be painterly and her sense of color exquisite -- even in cases where the plants chosen are simply cream, white, green and silver. 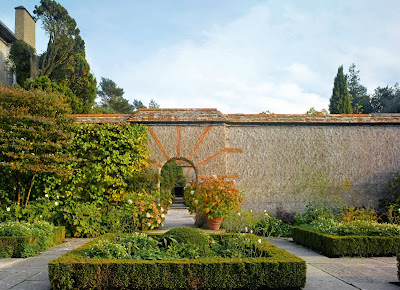 For me, Tankard's book is straightforward enough that I can follow along and learn, despite being a novice. 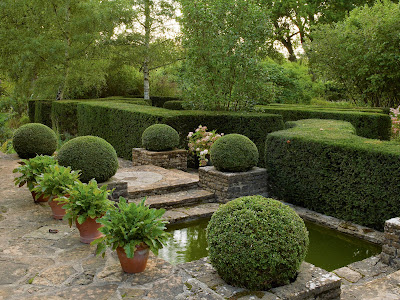 Now I better understand how Jekyll popularized a less rigid, naturalistic look that at the time was a breath of fresh air -- a sharp contrast to the earlier Victorian era's formal schemes, such as patterned, carpet-like beds of flowers.  She favored hardy, native plants and designs which seamlessly combined both loose and structured elements. And her garden designs related closely to the architecture of a house; many of you already know that she is remembered for her collaborations with architect Edwin Lutyens. 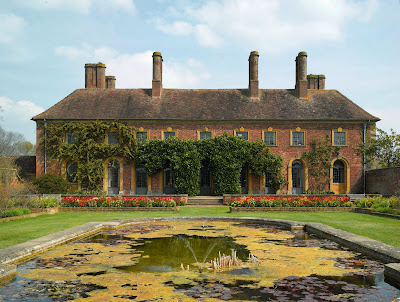 If you are very well acquainted with Jekyll and the history of landscape design, I think the wealth of beautiful images in this edition will still feel fresh. In addition to black-and-white archival photography from Country Life (so striking on its own) there are numerous contemporary color pictures. Design enthusiasts of all kinds will be interested in the detailed section on garden ornament, the accounts of her work with architects, and the old houses featured -- I counted at least 30, including the National Trust's Barrington Court (pictured directly above). One photo in particular has me dreaming of white wisteria. It's not shown in this post but I hope these images whet your appetite. 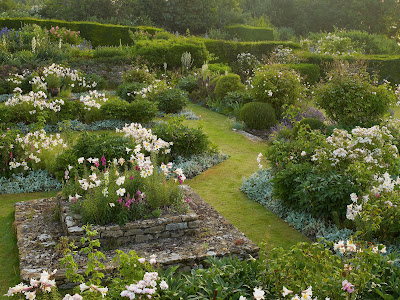 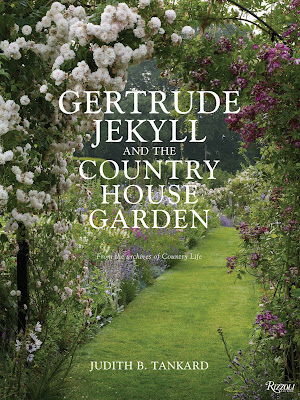 Gorgeous gardens and grounds. Jekyll is a master! So much lushness!

I love these posts about garden and landscape designs. These gardens are true places for dreams - what could be more relaxing and soothing the soul than sitting in a place surrounded by various shades of greens and the colours of flowers.

I am racing back to the US way earlier than usual this year just to plant our garden - two bitty strips of border and a spot for a hydrangea hedge - but in my head it will somehow look like something of Gertrude's. Thanks for these timely posts!

That last image is amazing, the contrasts between green and white, plants and stone, angular and round - where is it?

Yes! The contrasts. It's the Manor House, Upton Grey, Hampshire.

Happy you are enjoying them!

Sounds like you are well acquainted with these gardens. Thanks for stopping by.

I'm sure the color inspires you.

I am familiar with the period black & white photos but it is great to see these new color shots of the Jekyll designed gardens.

When I first started dreaming of my garden, Gertrude Jekyl was a wonderful inspiration. Loved her advice on planting trees: close enough so they can touch hands. Looking forward to reading this book.

Gorgeous gardens. It reminds me of the book The Secret Garden.

These gardens are fantastic. And, I can't agree more...there's nothing better in a grand garden than walls, gates and hidden rooms.

I received Tankard's book on Jekyll's photographs of her garden when I graduated from high school (back in 1989). It is still one of my favorites, so I am very much looking forward to this book. Thanks for such a gorgeous preview.

I have been a fan of hers because she tried to achieve a more natural look. Not all entirely formal gardens as some you have shown.

As for gardens, I found your blog today because I have been looking for as you say a view of a garden from another room, or maybe through a wall or arbor.

Having just seen Emma again, I am trying to find some stroll gardens and a space that she and Knightly plopped down in the middle of their walk. Four pillars and that small bowl of fish on a pedestal really got to me. Just as some of your pictures. I would love to see that book too.

I have a book about her gardens and I love some in particular where she combines silver, white and green plants.
And Rosemary Verey gardens are fantastic too. I could go on and on.
Nice post.
Jo at sunnyside

You've got me curious to see that fish bowl scene again :) Thanks so much for stopping by.

Late comment here. I rarely order books based on blog posts alone, but I did this time and love the book. I have other books on Jekyl but the older photos add a perspective, since things all look so new. Its very well written, and I look forward to reading it properly when winter returns.

Sounds like you've been studying her for a while so I'm thrilled to hear that you're pleased with Tankard's book. Thanks for letting me know.

I first learned the name Gertrude Jekyll in the late 80s, when I started a rose garden full of David Austin roses. I planted three Gertrude Jekylls and many others. I loved my rose garden. I love the photos you posted, and would love to have such a lush, beautiful garden. I downsized a few years ago, and planted a few DAs, but since the drought here in California, I've had to rethink my garden plantings. Native perennials will have to do, and although there are many beautiful plants from which to choose, I'll miss the lush greens, endless bloom colors and wonderful scents of a rose garden.