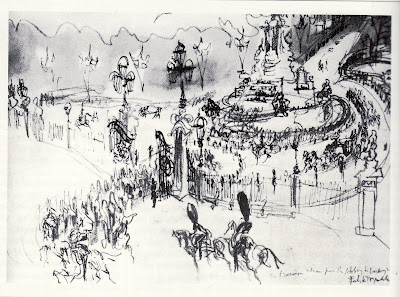 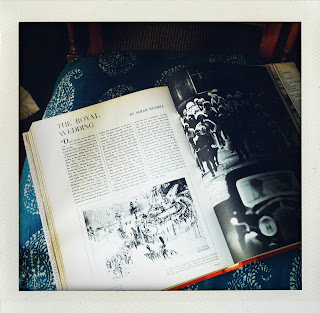 I thought it would be interesting to crack open The World in Vogue (first edition, published in 1963) and see which weddings the magazine's editors chose to include. This book covers seven decades, from  Vogue's beginnings in 1893 to the very early 1960s (meaning, unfortunately, no cool pictures of Bianca Jagger's white, early-70s YSL wedding suit with wide-brimmed hat are in there.)

Actually, very few weddings are highlighted. A smattering of parties and two coronations are covered, with some striking color photographs of Elizabeth II, but for whatever reason weddings -- royal or otherwise -- are in short supply. There is a postage-stamp-size picture of Lady Elizabeth Bowes-Lyon (later The Queen Mother) in her wedding dress in 1923, and Cecil Beaton's photographs of the Duke and Duchess of Windsor's 1937 wedding made the cut. One of the most charming spreads, though, focuses on Princess Margaret's 1960 wedding in Westminster Abbey.

Vogue's take on this event seems to be that it was relatively warm and intimate (as far as royal weddings go), so the editors illustrate Sarah Russell's story with artist Feliks Topolski's loose sketch of the procession as well as a photo of the Royal Family throwing rose petals at "the getaway car." The bride's dress is described as unadorned but if you're a student of fashion you'll be disappointed by the absence of a photograph. Strangely, considering the source, there's no picture of the dress. 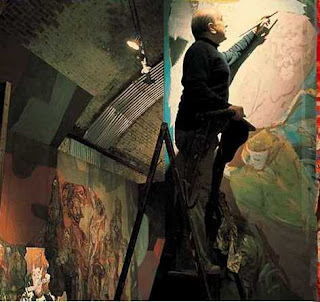 [The artist at work via Topolski Studio.]
More of Topolski's work can be seen over at the Tate's site. and at the late artist's site. During World War II, he served as Official War Artist and, according to the V & A, painted portraits of the Royal Family as well as other large-scale paintings documenting the Queen's coronation. I smiled when I realized Vogue's editors chose his sketch of the wedding procession because young designers today are still inspired by the famous route.
Posted by Style Court at 6:19 PM

Courtney- We were obviously doing the same thing over the weekend...looking at The World in Vogue! That sketch is so charming.

Jennifer -- Yes! I love the maharaja picture you ran with. Such an invigorating post.

Of course, you know I love this! So fresh.

It would seem that Vogue omitted weddings in favor of more stylish fashion. That sketch of the procession is fabulous, however. I have to say that I am quite surprised at how attractive Princess Margaret was in the early 60s. I suppose the Charles-Camilla wedding marked the new era of Royals marrying for love, but the William-Catherine marriage will hopefully make it stick.