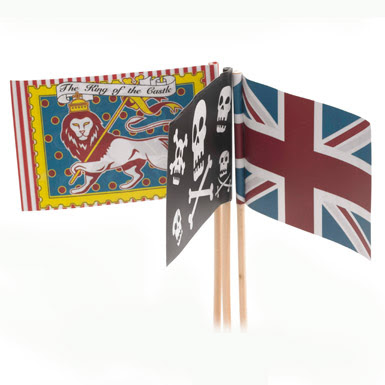 [Pack of six vintage seaside sand castle flags from the V & A's Royal Wedding mini-shop.]
I've always loved the Union Jack. I enjoy seeing how L.A.-based interior designer Betsy Burnham incorporates the iconic flag into her projects (don't miss her revamped site), and my affinity for some of the UJ-inspired pillows hasn't really waned yet. So the current wedding-related flag deluge doesn't bother me. It's fun. That said, even I nearly hit UJ overload the other day while researching the wide spectrum of highly creative goods graphic designers have made in response to the big event. (Initially I wanted a Union Jack rubber stamp but they are harder to find in the U.S. and a little less plentiful in general than I expected.)

The V & A's offerings, which encompass kitsch, Pop, and pretty classic things, include a Big Ben stamp but no flag. 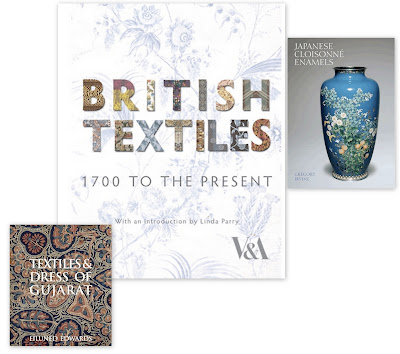 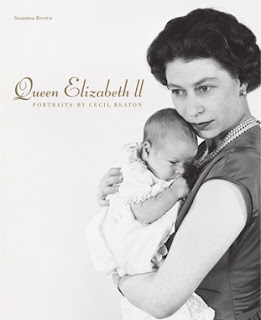 The museum shop does, however, have more new books: Textiles and Dress of Gujarat by Eiluned Edwards, British Textiles: 1700 to the Present with intro by Linda Parry, Japanese Cloisonne Enamels by Gregory Irvine, and coming in September, Queen Elizabeth II: Portraits by Cecil Beaton by Susanna Brown. 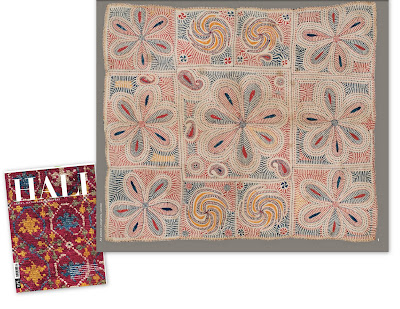 [Early-20th-Century Kantha embroidery, Victoria & Albert Museum, London. Gift of Karun Thakar in memory of Mark Shivas, 2011. Photography by Longevity, London as seen in Hali, spring 2011. Click to enlarge.]
Also, as reported by Rosemary Crill in Hali, spring 2011, the V & A recently received a gift of seven Bengali kantha embroideries. Made domestically by women, these folk textiles were under-appreciated in the past. Although, Crill notes that the Philadelphia Museum of Art has been ahead of the curve in this area.

Update 7:50 p.m.
If you're curious about Royal Wedding apps, this is a good read. And here's one of the most charming souvenirs. Janet also sent me a link to Liberty of London's display.


Related past post: What a Girl Wants.
Posted by Style Court at 5:28 PM

May the force be with you as the Empire strikes back. (There's an app for that...)

I've had a lot of technical difficulties this evening but if I have time I'm going to try one of the apps tomorrow. Sorry for the delay with the great image of the new Cecil Beaton book.

Also, apologies for the late addition of Janet's find -- that very charming wedding map. Everything should be all together now!

Oops...I didn't mean difficulties with the apps but rather with this post.

I think the Union Jack lends itself very well to artistic interpretations. Would be fun to do a follow up to this using the Stars and Stripes (perhaps for July 4)!!!