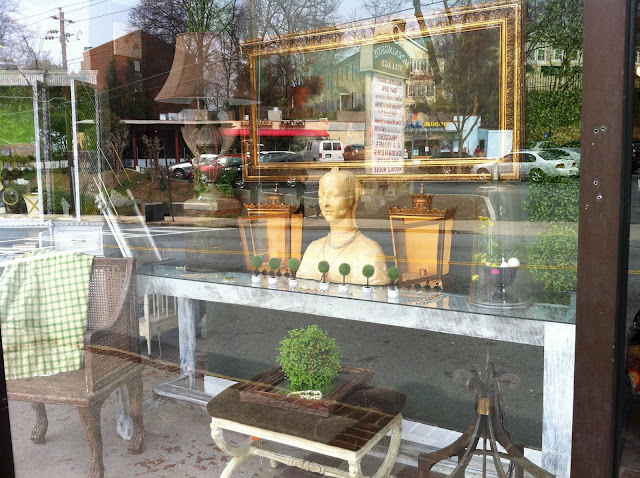 [Unless otherwise credited, all "Polaroids," collages and other snapshots are my own.]
Scientifically, I guess, scent is the more powerful trigger of memory but for me it's color. The hit of saturated green paint seen inside a cabinet at Providence reminded me of Owens-Thomas House, part of Savannah's Telfair Museums. 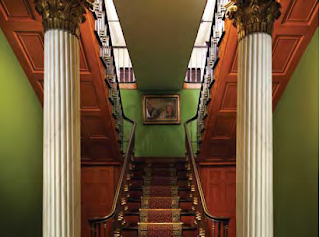 [Owens-Thomas House grand staircase via Telfair magazine.]
2011 marks the Telfair Museums' 125th birthday.  If you're not familiar with the Savannah institutions, there are three under the Telfair umbrella: architect William Jay's English Regency Owens-Thomas House, built from 1816-1819; Telfair Academy, also designed by Jay in the neoclassical Regency style; and the contemporary Jepson Center.

Years ago, a film trade magazine assigned me a story on movie-making and TV production in the Southeast; ever since I've been more curious about the subject. Back then, I think I referenced The Legend of Bagger Vance, Midnight in the Garden of Good and Evil...and, yes, Dawson's Creek. When I recently noticed a Telfair magazine blurb about Robert Redford shooting scenes for The Conspirator at Owens-Thomas House, I paused to read. According to Redford's blog, the director was after a deep palette suggestive of Rembrandt. Kalina Ivanov, known for her work on Grey Gardens, did Conspirator's production design. 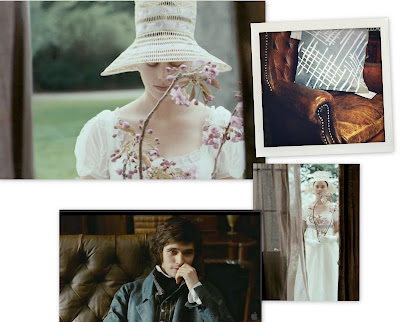 [All images except the Polaroid are my screengrabs from Campion's film, Bright Star.]
For anyone in Atlanta who is after that warm, very uncontrived but still elegant look Jane Campion achieved in Bright Star, the leather wing chair I posted the other day is now in Providence's window, so you can see it if you're going down North Highland Avenue. (Again, the "Hatch" pillow cover is from the Cassie Collection by Cassie Hart, a Savannah College of Art and Design alum.) I included the curtains floating in the breeze because they remind me of Kate Headley's photo of tent flaps in India, posted yesterday. 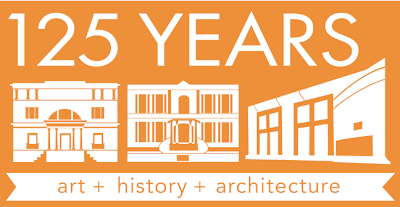 I would kill for that cane chair in the window vignette!

It is a super cool chair. The caning is kind of oversized. And it's very rustic-meets-elegant.