Summering at the End of Empire 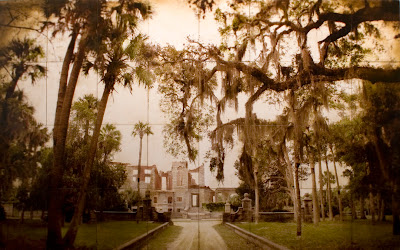 [John Folsom, photography on board with oil and wax medium. Image courtesy the artist.]
Inspired by remnants of the Gilded Age (not the most recent decades highlighted by Julia Reed during her SCAD Style 2010 talk, but the late 19th century period characterized by even grander houses), John Folsom's upcoming exhibition, Summering at the End of Empire, focuses on Cumberland Island with a nod to Longleaf pine forest preservation in South Georgia.

Shown above in one of Folsom's photographic paintings are the ruins of the Carnegie family's Dungeness obscured by Spanish moss and other elements of contemporary wilderness. (Click the image to enlarge and better see how the artist incorporates a grid into the work.) Begun by Thomas Carnegie and his wife Lucy in 1884, this mansion ultimately burned at the end of the 1950s.  Today the ruins are an iconic island site much like the wild horses that roam Cumberland. Another stately house built by Lucy Carnegie, the Georgian-style Plum Orchard, was donated to the National Park Foundation by the Carnegies in 1971.

Representing both new and past work, Summering at the End of Empire opens at the Marietta-Cobb Museum of Art on April 9 and continues through July 3. If you find yourself in the neighborhood, Folsom is scheduled give a talk and tour of the show on Thursday, June 9 at 7 p.m.
Posted by Style Court at 5:03 PM

My daughter, who is my blog partner, got engaged on Cumberland Island. They will celebrate their first anniversary in three weeks.

just gorgeous, I love that whole area of South Georgia. There is nothing quite like Spanish Moss.

I just love all of his work and really hope to be able to see his exhibit in Marietta. Thanks for the link and letting your readers know about it.

I always enjoy reading about all these wonderful exhibitions !

I love Folsom's work- there has been an exhibition of his work at the Gibbes Museum and his work is curated at Rebekah Jacob Gallery also here in Charleston.

Yes, the Gibbes show was wonderful!

Cumberland is such an idyllic spot for a wedding.

Laura -- I thought of you when I posted this.

DT -- Yes, so many complex layers.

LoS -- I always know where I am when I see the drippy moss.

Many of Mr. Folsom's paintings are big and impossibly atmospheric. As you walk closer to them the air gets hot, heavy, and humid. Southern ladies and gentlemen begin to perspire.

Thanks for posting more details on the exhibit. The museum website is quite skimpy and I was curious to learn more.
His work is quite lovely, somehow tragic and majestic all at once.

Erica -- I love your description.