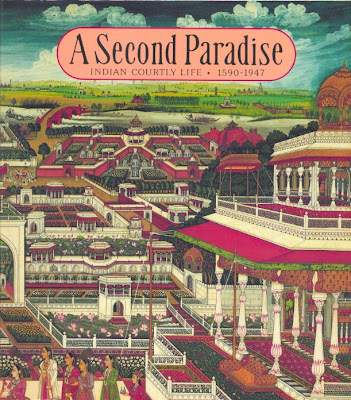 More often than not, the vintage art and design tomes that capture my interest are either very hard to find or exorbitantly expensive. But a 1980s book edited by Jackie O during her Doubleday years, Naveen Patnaik's A Second Paradise: Indian Courtly Life 1590-1947, is relatively easy to track down and typically sells for around $15.

Described by Greg Lawrence as one of Mrs. Onassis's favorite projects, the edition is illustrated with contemporary paintings commissioned to evoke the style of old Indian miniatures. Bannu (father of Shammi Bannu) was the painter/Indian art restorer tapped to do the pictures, and the book dovetailed with Diana Vreeland's 1985 exhibition, Costumes of Royal India. 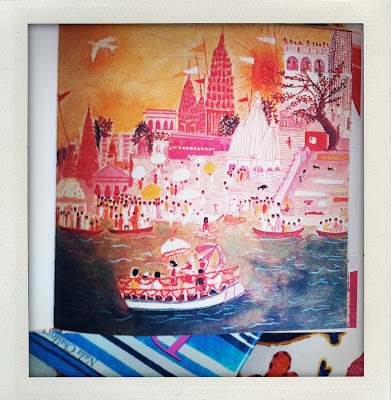 Knowing more about Jackie's contributions to A Second Paradise, it's hard not to remember artist Jacqueline Duheme's illustrations of the former First Lady and her sister, Lee Radziwell, in Jaipur in 1962 (shown here, above, in Mrs. Kennedy Goes Abroad). In past posts I've referenced Duheme's paintings, and author Lawrence also mentions them in his discussion of Paradise.

The Philadelphia Museum of Art
Francesca Galloway
The Met
A Little Post-Holiday Splendour
Posted by Style Court at 7:39 PM

What lovely pictures..such gorgeous colors( its India afterall)...It is wonderful to find a slice of my country every now and again on your beautiful blog, Courtney!! Hope to see you on my blog sometime soon!! have a lovely weekend!! xx meenal

Thanks so much Meenal! Same to you.

Courtney,
Naveen Patnaik is now the Chief Minister of the state of Orissa in the eastern part of India. His sister is the author, Gita Mehta who is married to Sonny Mehta of Alfred A Knopf.
Rina

Rina -- I just ordered a copy and can't wait to dive in! Thanks.