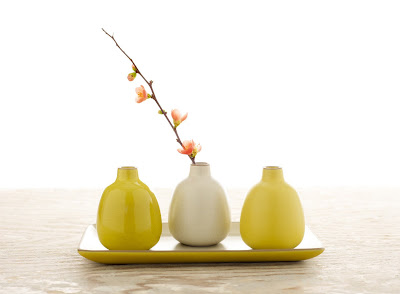 [Bud vase set from Heath Ceramics' new Summer 2011 collection.
Photo credit: Jeffery Cross. Image courtesy Heath.]
Today's installment of Connections featured Met curator Soyoung Lee talking about abstraction. She said ancient pottery is usually so visually powerful because it's all about getting down to the most basic lines and forms. And she mentioned that simpler, abstracted designs are more ambiguous, allowing us to make our own interpretations. So, pottery and restrained forms were already on my mind when I received a perfectly timed email from Heath Ceramics about their new collection available the first of April. 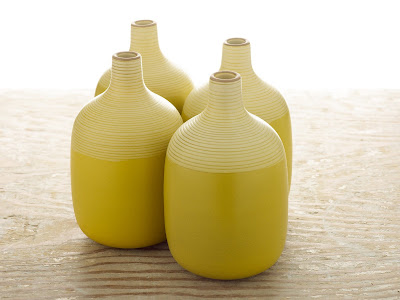 [Photo credit: Jeffery Cross. Click to enlarge. Image courtesy Heath.]
Handmade in the U.S., in California, the spun lemongrass single stem vases, above, are characterized by narrow stripes achieved by lightly touching an etching tool to the spinning vase. Heath says the top layer of glaze is stripped away to reveal the glaze beneath, making each piece distinctive. Also, the etched vases are made in a limited quantity -- only 150 pieces.

This time, I'll end the post without juxtaposing Heath's sunny shades and appealing forms with any other objects; let the pieces stand on their own. In the spirit of Lee's talk,  I'll leave you to make your own connections. But to see more ceramics handmade locally, visit The Center for Southern Craft and Design. 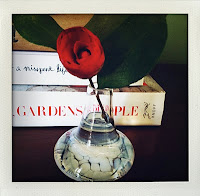 You might also enjoy: Asia Week 2007, Connecting Lines and Boggled by Bottles.
Posted by Style Court at 8:09 PM

Such a beautiful blog. Really love it all.

Beautiful color and what a simple shape! Love it!

The lemongrass is so refreshing!