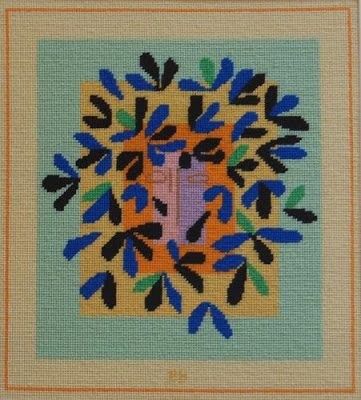 [Daphne (2009) Andrew Bucci Needlepoint, 13 x 11.5 inches unframed.]
In May, I will have been blogging for five years. (Whew -- flashing back reminds me how tedious HTML could be in the earlier days.) High points along the way have included opportunities to become better acquainted with artists not covered in my art history books and chances to share their work with a new audience. Take, for example, Mississippi-born Andrew Bucci. 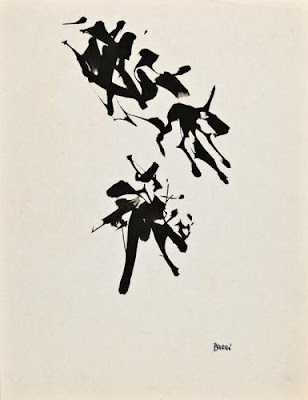 [Abstract (1950s) Andrew Bucci Oil/Paper 11 x 8.5 inches.]
In the past we've focused on his mid-century portraits and abstracts on paper but not his needlework. Cole Pratt in New Orleans happens to have two of his needlepoint pictures, and I think the Cooper Hewitt's live Delaunay webcast (with all the talk about Delaunay's openness to different mediums) made me take a second look.

The needlepoint shown at top is recent, completed by Bucci in his late 80s. It seems to be influenced by Matisse, while the second 1950s piece, I'm guessing, shows his interest in Japanese art. Speaking of the latter, the Gibbes has a nice interactive feature about woodblock prints and cultural exchange between Japanese and American artists (click and scroll down to Moon, Flower and Hawk Moth). 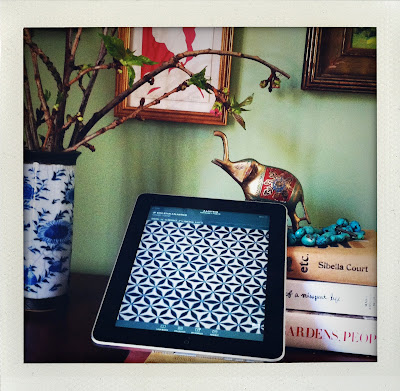 Of course, Michael Smith needs no introduction. The first TV episode I downloaded to my iPad was the Man Shops Globe with Smith joining Anthro's buyer-at-large, Keith Johnson, on a working expedition in Mexico. So, naturally, I was happy to see Smith's Jasper Collection app in the iTunes store. His textiles show off especially well via the app -- that's Star Atlantico, above -- but another bonus is the lookbook with a few rooms I've not seen before.

Related reading: This Museum Has a Lived-In Look. (Thanks Mrs. Blandings for alerting me to this one!) And Introducing Picasso: Themes and Variations.
Posted by Style Court at 1:24 PM

Congratulations on that impending anniversary. Though I came in late, I went back and read from the beginning. It has always been a joy to be here. Thanks for the heads-up on the Smith app!

I think you'll like the app. I need to see what the word is on another season of MSG!

And right back at you. From where I sit, it's an honor to have you visit. Thanks for reading!

That needlepoint is beautiful! Thanks for the info on the Michael Smith - very cool. Oh, and happy early blog birthday. I didn't even know what a blog was 5 years ago. My, how times change!

So glad you like the needlepoint! Ravishing colors, no?
Yes, things have really sped along the last few years.

Hope you enjoy the Smith app.

Thanks for stopping by!
Courtney

I love the contrasts in the Bucci needlepoint: strong and soft colours, rectangles and leaf-shapes - and working in that 'Matisse' manner in the present day has an inherent contrast as well.

Yes, something about the black and cobalt against the pale blue, yellow and lavender-pink of the face. And then that hit of orange.

I love that Gibbes interactive feature! You had mentioned it before and I ended up including it in a post. Are you planning any kind of celebration for your five year anniversary?

Jacqueline -- they really did a great job, didn't they?

The Bucci needlepoint is really wonderful! I am inspired. . . to get back to my stitching.