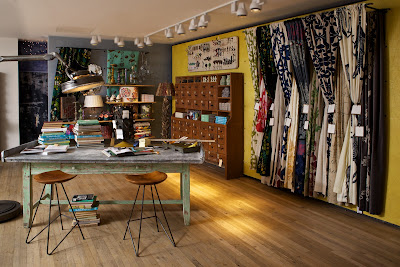 [Image courtesy Anthropologie]
It's called the decorator concept: a design-focused workshop-style boutique will soon be popping up within select Anthropologie stores, and Atlanta will be among the cities receiving the expanded offerings. 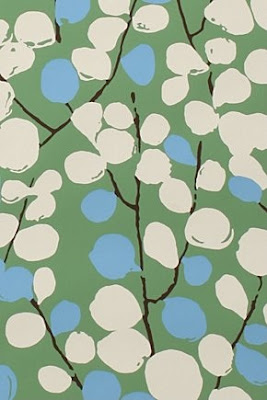 [Porridge's handprinted wallpaper available at Anthro.]
Offerings like wallpaper from Cole & Son, Patch, Porridge, Tracy Kendall, Vera Neumann and Catherine Martin. (And, yes, the shops will be able to provide swatches.) Design enthusiasts will also find concentrated in one area design books and magazines, including the quarterly Anthology, along with rugs, curtains, furniture, hardware, and lighting. 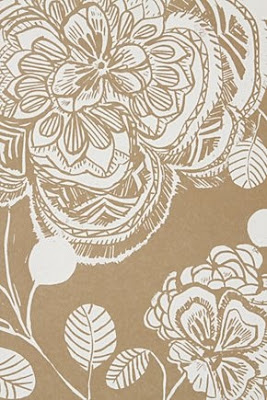 [Over & Over wallpaper available at Anthro.]
I'll have more to report in the next few weeks but quickly now I'm posting the list of twelve locations where decorator shops within stores are scheduled to open March 24. Each shop will look a little different.

Also a note to online shoppers: Anthro will add a new feature to its site, too. “For the Decorator” will enable customers to request upholstery fabric and wallpaper swatches and will provide tools like the wallpaper calculator and a design glossary. Expected launch date March 17  the week of March 21st. 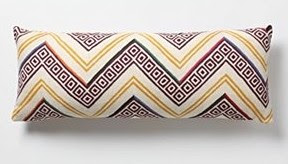 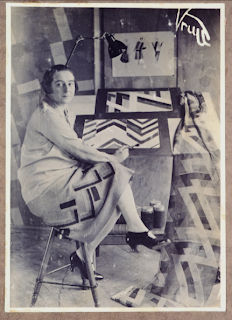 [Sonia Delaunay in her studio at boulevard Malesherbes, Paris, France, 1925
Photographed by Germaine Krull (German, 1897–1985)
Bibliothèque Nationale de France
© L & M SERVICES B.V. The Hague 20100623.]
The other day Emile addressed the often opaque language used in discussions of contemporary art.  His blog post made me smile and think of Daniel Franks, the grounded art critic character in Steve Martin's latest novel, An Object of Beauty. As I recall, Franks grows weary of gallerists who constantly describe two juxtaposed paintings as being "in dialogue." Personally, I do love a good pairing, and I think connections are a lot of fun. Today's pairing is simplistic, really just a "then and now."  The groundbreaking 1920s designs on Sonia Delaunay's drafting table (first shown in an earlier post) are, to me, precursors to the offerings we find now at Groundworks and Anthropologie.

Last image courtesy the Cooper-Hewitt in conjunction with "Color Moves: Art and Fashion by Sonia Delaunay", the first major U.S. exhibition of the abstract painter’s work in 30 years.

Update 3.16.11
This just in from Anthro: the online launch of “For the Decorator” is now scheduled to happen next week.
Posted by Style Court at 6:36 PM

thats wonderful news for anthro fans particularly in the decorating business( and that is some number)...cannot wait to see the online feature, come march 17!! just hopped on over to read Emile's post...his thoughts resonated with me....the quest to make art selectively accessible/understandable often reeks of prejudice and elitism to me...xx meenal

I already have way too much fun flipping through their wallpaper choices.

Yes these pairings are useful because they make you wonder about the similarities and differences between then and now: these patterns seem relatively mainstream now, but were they seen as revolutionary in Sonia Delaunay's time? Or were there precedents for it even then? We may now appreciate Delaunay's work for its visual punch, but was she herself 'just' aiming for visual brilliance, or were there other motives at play? I should probably buy the catalogue of the exhibition and find out :)

Oh no, the washington DC store isn't getting one :-( And it's right in the heart of Georgetown near all of the architects and interior designers in dc's offices!

I am fainting.....this is the best news today!

That's exciting news! Can't wait to check it out.

I love Anthropologie and I am so sad that they are not global yet. Every time I am in the Stated I always have to pay extra for luggage. Suitcases filled with Anthropologie goodness.

Design enthusiasts will also find concentrated in one area design books and magazines.