Rhythm and Blues (and Greens) 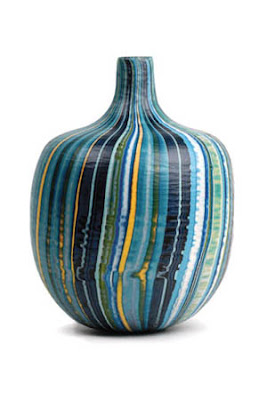 [Mokume Battuto Ocean Jug by Caleb Siemon.]
In the National Gallery of Art film, Paul Mellon: In His Own Words, the museum's founding benefactor and long-time trustee says, "Collecting is the sort of thing that creeps up on you, prompted by a number of influences, some of which you are never conscious of...When I buy a [work] some feature about it may remind me consciously or unconsciously of some past thought or feeling, moment of pleasure, or even sadness. It might just be a fortuitous combination of colors, a certain calmness, or a beautiful sense of proportion." 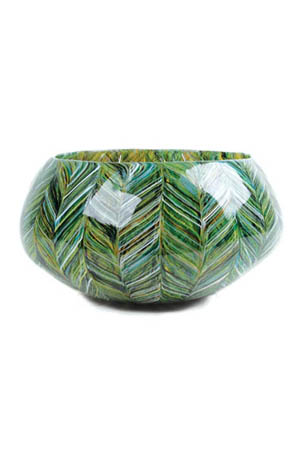 [Thread Cane Grass Closed Bowl by Caleb Siemon.]
Sometimes we see things in a painting, sculpture, or vase that have little to do with the artist's concept. The patterns of glassblower Caleb Siemon's pieces could be interpreted in many different ways,  and the names of the objects shown here offer a clue to what he had in mind -- I believe "mokume" is a reference to a grain-like pattern -- but I see textiles in both. (BTW:  Siemon and his work have been popping up everywhere lately from The White House and Harper's Bazaar to Lonny and Anthropologie.)

The NGA's 48-minute film about Mellon can be downloaded for free in iTunes (under podcasts, not documentaries).

Those are the great works of art, aren't they: the ones that convey and suggest more than the artist intended. That is how the illusory nature of art, its lack of reality, somehow sucks the viewer's imagination in and entices it to create a real and palpable sensation. Emptiness leading to fullness, if you want to put it in a Daoist way :)

What beautiful pieces...I always feel that art conveys what the beholder wants to see/read...there are always many interpretations...therein lies the beauty and versatility of art...thankyou for this lovely post, Courtney!!...xx meenal

Thanks as always for taking things to the next level with your thoughtful comments.

My pleasure. And your thoughts echo much of what Mellon says in the film.