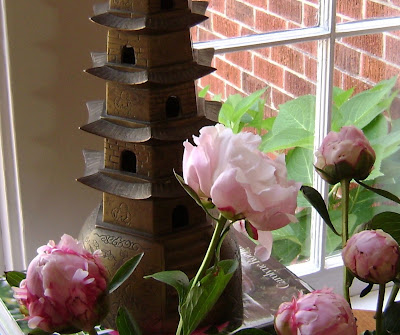 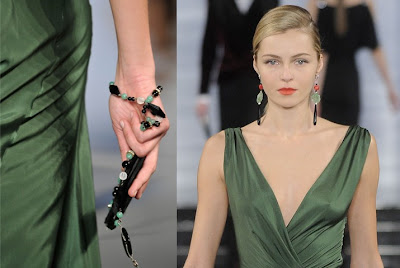 [Top image, my own; clothes shown above and below from Ralph Lauren.] 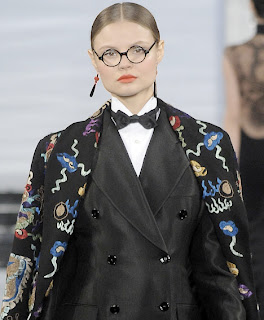 We're all very accustomed to Western fashion and interiors with Chinese influences -- in Ralph Lauren's fall 2011 collection there are nods to The Last Emperor and 1930s Asian glamour -- but I have to say, I know very little about Indian textiles with Chinese motifs. The latter is the focus of a new book, Peonies & Pagodas: Embroidered Parsi Textiles. 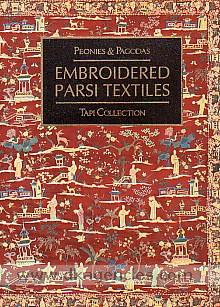 [Below, a detailed view of a late-19th-century sari with Chinese figures.] 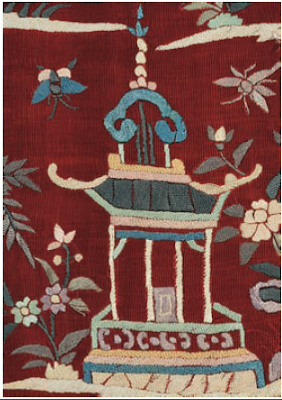 I mentioned this title last year but haven't noticed it for sale yet in the U.S. Good news though: it appears that the book can be ordered through Vedams. The catalogue draws from textiles in the TAPI Collection, specifically pieces worn by Parsi women and children in the 19th and 20th centuries.

Editors Shila Shah and Tulsi Vatsal describe the textiles as "embroidered with exotic Chinese patterns—pagodas, pavilions, bridges, peonies, bamboos, peacocks and phoenixes—executed mainly in monochromatic white on brightly colored silks." Because Parsi merchants collaborated so well with the English East India Company, the editors attribute the Parsi penchant for Chinese design in part to exposure through international trade. The "Chinamania" that swept through Britain in the 19th century is said to have influenced Parsi tastes, too.

I love your beautiful peonies and pagoda Courtney! What a wonderful photo, you captured it perfectly.

How interesting and inventive, to use a blue cloud motif as the 'roof' of a pagoda. It could be an auspicious lingzhi fungus motif as well, I suppose, as that sometimes looks rather similar, but either way it is a nicely lateral way to construct a pagoda image.

Ever the observer inspiring me to research new things. Thanks for pointing this out.