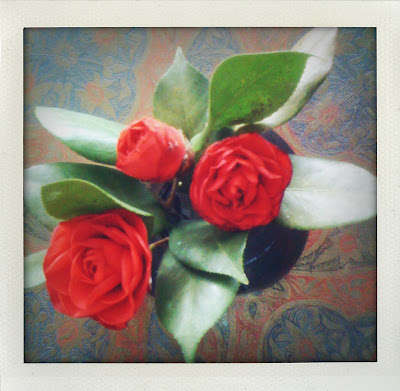 [Photo my own. Taken with shakeitphoto, an app suggested to me by the wonderful Janet Blyberg.]
With all the snow and ice, I didn't expect to see many fresh camelias this season but several of my mom's actually bloomed. 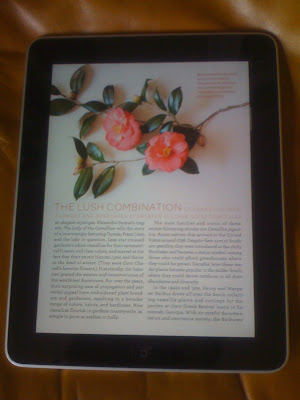 Ngoc Minh Ngo's lovely photography in the February issue of Martha Stewart Living (for iPad) has also provided me with a camellia fix. Not wanting to sound like a product reviewer or gushing infomercial participant, and worried about boring everyone who -- like me up until a few weeks ago -- functions iPad-less, I haven't mentioned this app before.  That said, it was one of the first apps I downloaded after finding a surprise iPad under the Christmas tree. And, bottom line, the app is super-cool. 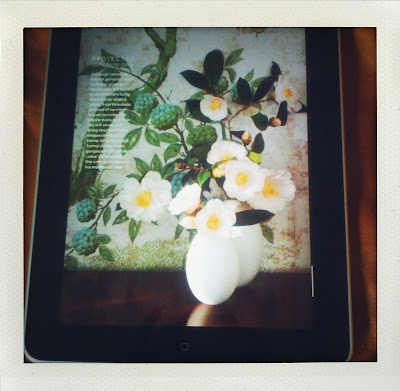 Martha Stewart's magazine designed for the iPad is distinct from conventional digital mags in that the former is more interactive and tactile. For example, I've been tapping different blossoms to learn about various camellias and to become immersed in the beautifully shot video of Lin Backus' garden near Savannah. All of the content associated with traditional print -- well-researched and professionally-written stories, lush photography -- is there, it's just ramped up.  The creative team really seems to be using the technology to its best advantage. (So, I do sound like a product reviewer but rest assured I received no freebees, perks or compensation from Apple or Martha.) 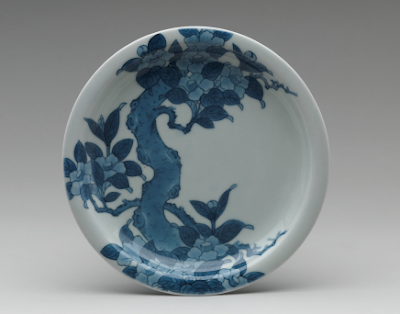 [Dish with design of camellias, first half of the 18th century, Japan, Edo period (1615–1868). The Harry G. C. Packard Collection of Asian Art at the Metropolitan Museum of Art.]
Here is one way camellias were appreciated in the 18th century: Japanese Nabeshima ware, painted in underglaze blue. This dish is now in the Metropolitan Museum of Art.
Posted by Style Court at 4:56 PM

I love camelias and have red ones growing in my garden.

Although aficionados grow exotic camellias in a greenhouse, there are many hardy ones that do quite well in my Zone 7 climate.

Camelias along with gardenia's are two of my favorite blossoms. There is something so inspiring knowing that they have long been a fascination for many and continue to be so. Both were in my wedding bouquet.
pve

It is so good when magazines actually use the potential of web-based editions to add links and additional features - still relatively rare, but I suppose it requires quite a big change in attitude.

I started a poster project years ago for our local community mental health center that featured the art of local artists. One artist, from the south, painted a Camilla sasanqua in the up close and personal style of O'Keefe. The publisher whose generosity made this project possible took at look at it as it came off the press and said, "That's enough to make a Catholic boy blush." Still love that comment. And, by the way, what species is that Christmas tree of yours that sprouts i-pads underneath its branches? What a lovely gift to put into your hands, SC.

Yes, it was a special year. Gifts as big as an iPad aren't typical so it truly was a great surprise.

Now I'm off to check the Martha Stewart story for a sasanqua...

There was a demo at Moma for one of their apps for the tablet and it really was amazing. I'm sure seeing these Martha Stewart ones are similar, I wasn't really a believer in them until seeing a demo.

The Camellia photos are so beautiful to see at this time of year. They remind me that spring will be here soon. Thank you for this lovely post.

C, Thanks a lot!!! This is the second time in three days that you've made me wish that I had one!! ;)