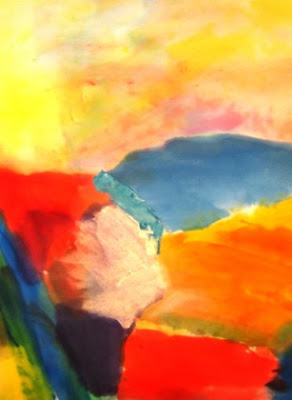 [An Unknown Hour, Ronnie Landfield. Acrylic on canvas, 1998. High Museum of Art ]
In the art world, Herbert and Dorothy Vogel are a rare and inspiring pair. Working with more modest means than most collectors -- Dorothy is a retired librarian and Herb is a retired U.S. Postal worker -- but fueled by a shared passion for contemporary art, they have been acquiring pieces since their marriage in 1962. (Actually, they began before that; a ceramic Picasso vase was bought to celebrate their engagement.) Art was such a priority early on that the couple chose to live on Dorothy's salary from the Brooklyn Public Library, while Herb's income was saved for drawings and paintings. Along the way, they assembled an internationally respected collection that ultimately grew too big for their small New York apartment.

So, as noted by Atlanta's High Museum of Art, the Vogels gave 2,400 pieces to the National Gallery of Art in the early 90s. Later, in 2007, they worked with the NGA on a plan to share more works with people across the U.S. through The Dorothy and Herbert Vogel Collection: Fifty Works for Fifty States. The High was among the first museums to receive a generous gift and on January 29 an exhibition showcasing the works will open to the public. (A note to Alabama residents: the Birmingham Museum of Art is another recipient.) 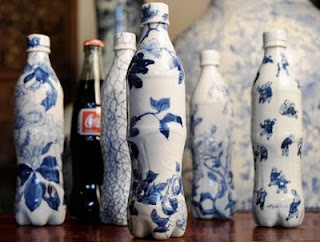 [Taikkun Yang Li, Underglazed porcelain cola bottles.]
Related past posts: Delicious and Refreshing, Living with Art: Kristen Buckingham, Collecting and You Wanted Green, But Got Blue.
Posted by Style Court at 9:10 AM

As a former fundraiser, the Vogel story made me deliciously happy. I have known a few couples like the Vogels. People who loved to give, to share, to make a better world. In this age of fakes, shams and charlatans, a couple who shares a love and love to share it, makes my day.

The story of the Vogels gives me the warm and fuzzies. Their story makes me think twice about bemoaning my meager income. I truly admire their resourcefulness and generosity.

Their story reminded me a bit of Betty Freeman, who died in 2009, at least in the sense that they were all connected by one thing - the genuine love of art. It's something that seems a bit lacking in this age of mega-accumulators who value their art for its investment potential and look to Gagosian to tell them what's next.

Wow this is so inspirational! Shows that you can do what you love for work, and also find a way to do the hobbies you love as well. They also have such amazing taste! I also like their creative budgeting. Hope to be in Atlanta to visit this exhibit sometime this spring ..thanks for sharing.