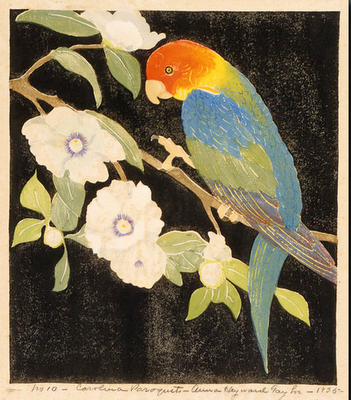 [Carolina Paroquet, 1935, by Anna Heyward Taylor (American, 1879 – 1956),
woodblock print on paper, gift of Anna Heyward Taylor, Gibbes Museum of Art 1937.003.0005.]
Looking ahead to the new year, the work of Charleston Renaissance printmaker, Anna Heyward Taylor, will be on view at the Gibbes January 14 through July 17, 2011. Before settling in Charleston, South Carolina in 1929 and becoming part of the city's artistic re-awakening, Taylor was a globe-trekker. She visited the Far East, the Caribbean, South America and Europe. The upcoming exhibition, Anna Heyward Taylor: World Traveler explores Taylor’s adventures in Mexico and British Guiana (on the northern coast of South America), and highlights watercolors and woodblock prints inspired by those trips. 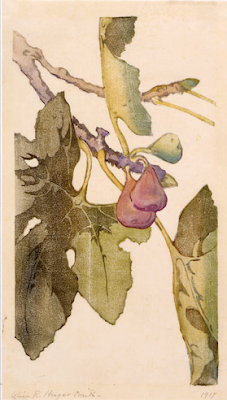 Another Charleston Renaissance printmaker mentioned here before, Alice Ravenel Huger Smith (1876-1958),  was also heavily influenced by arts from abroad. Drawn to the Japanese aesthetic, Smith used Asian techniques to interpret Lowcountry subjects through woodblock prints. You may remember the Gibbes put together a special interactive feature that looks at cultural exchange between Japan and the United States, and the phenomenon known as japonisme. 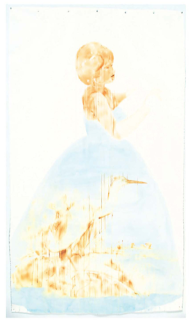 [Ardeidae, 2010, by Stacy Lynn Waddell (American, b. 1966).
Singed paper with watercolor; 96 x 51 inches.]
Update 6:27 p.m.
Shifting to contemporary women artists, Stacy Lynn Waddell's hauntingly beautiful first solo museum exhibition, The Evidence of Things Unseen, recently closed at the Gibbes but if you missed it, the show is traveling to Weatherspoon Art Museum. The exhibition will be on view in Greensboro, North Carolina January 22, 2011 through April 17, 2011. Click here to learn more.
Posted by Style Court at 10:55 AM

Although I do not care for chintz with a black ground, I find art an entirely different story!

John, yes, great observation. I love Old Dutch florals against very dark grounds and I like the bird/botanical against the black here.

Oh so funny - I agree also. Dutch still lifes are one of my favorite genres - and I adore the Anna Heyward Taylor print here - but never loved black backgrounded chintz either.

I love the colors in the fig print. Very rich.
Mary Ann