Trimmings and Tunes for Later 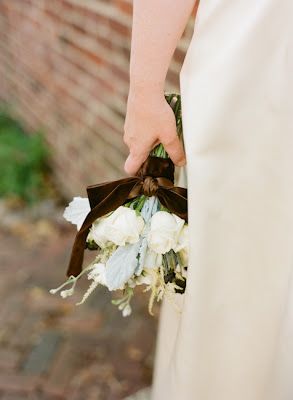 [©Kate Headley, posted with permission from the photographer, Kate, and the bride, Janet Blyberg.]
Contemporary Jane Austen. That was one of the guiding concepts behind Janet Blyberg's October wedding in Old Town Alexandria, Virginia. Months ago, I was treated to a sneak peek at her inspiration board and ever since I've been pestering Janet with questions about her sources. Later I'll share a few of photographer Kate Headley's beautiful detail shots. (Aided by the talented Stefan Hurray, aka Architect Design™ and a museum professional friend, Janet did her own flowers and other key wedding elements.) But in the meantime, since holiday season is swinging into full gear, here are her go-to places for ribbon:

Find antique options at, you guessed it, Antique Ribbon. Whether she's searching for a vintage Liberty print or a specific shade of paper, Janet is a resourceful woman. Sifting through Etsy, she found 19th century brown velvet at AR. Other ribbons came from Christopher Pines and G Street Fabrics. 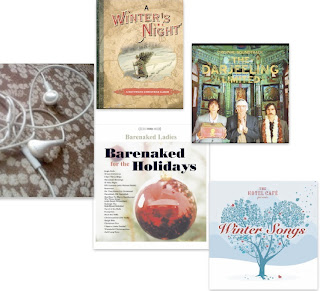 Now, speaking just for myself, whenever I'm doing a hands-on project that feels Jane Austen-ish, I prefer to mix things up and play decidedly non-corresponding music, like something by The Kinks (from The Darjeeling Limited soundtrack), The Stones or The Avett Brothers.

[Music enthusiast Mary Laura with Ben Lovett of Mumford & Sons, a favorite band.]
It’s a SC tradition to ask tastemakers, writers, and editors about their holiday playlists. Like Grant, I still don't understand the trend toward playing the music before Thanksgiving, but that said, I'm kicking off 2010 with a list of post-Thursday suggestions from Atlanta-based arts supporter and writer, Mary Laura Philpott. (It's actually an iTunes list that she likes.)

Lady Antebellum Baby It's Cold Outside

Sufjan Stevens The Friendly Beasts (Reminds Mary Laura of the first song her son ever sang in a preschool Christmas pageant.)

Hip Heavy Lip You're a Mean One Mr. Grinch

The Pogues Fairytale of New York

Mariah Carey All I Want for Christmas is You (Stylistically, seems a little out of character for Mary Laura but she says it puts most anyone in a happy mood. The holidays offer an excuse to listen to all sorts of styles.)

And I'm going to be predictable and again throw in Joni Mitchell's River along with Brandi Carlile's The Heartache Can Wait. A round-up of decades-old classics were offered in last year's post.

truly the most extraordinary wedding -so personal and it really was the most fun i've ever had at a 'big day'. Janet's thought and hard work really paid off with a memorable event.
I have to admit that I'm a sucker for the mariah carey christmas album -lol. It seriously started to be played a few times a week after Thanksgiving. Other than Mariah I tend to be a strictly Bing Crosby/Rosemary Clooney type of Christmas song listener. I'm putting up my tree tonight and may try out some of these songs from itunes, thanks!!

Oh, oh, oh! Thank you for such kind words. And Stefan too! Can't wait to share more.

One word- Pandora. No more playlists. I don't know how I lived without it.