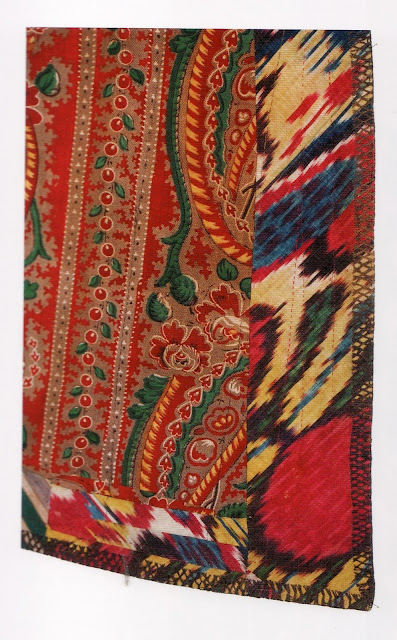 [Detail shows contrasting lining of ikat robe with recycled bias-cut ikat facing, Late 1870s - 1890s, The Textile Museum  Murad Megalli Collection. ]
In the Hali feature I referenced last week, well-known collector Lord Alistair McAlpine candidly says that he's drawn to a textile for its visual and tactile appeal and is less interested in the story behind the cloth. A lot of people feel the same way. But what's appealing about The Textile Museum's new exhibition catalogue, Colors of the Oasis: Central Asian Ikats, is that it satisfies viscerally oriented textile enthusiasts, scholars, and everyone who falls somewhere in between. 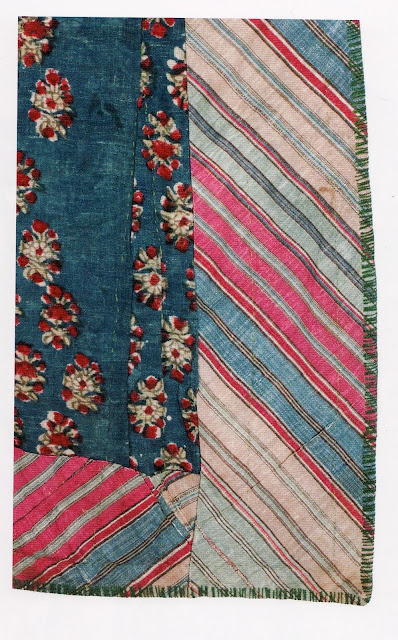 [Detail shows contrasting lining of ikat robe with bias-cut striped facing, 19th century, The Textile Museum  Murad Megalli Collection. ]
And whether you process information visually or intellectually, the authors hope that by the time you've savored all 108 double page spread plates and turned the last of the 304 mostly color-filled pages, you will think of ikat as timeless --  a laboriously dyed textile with a rich history. 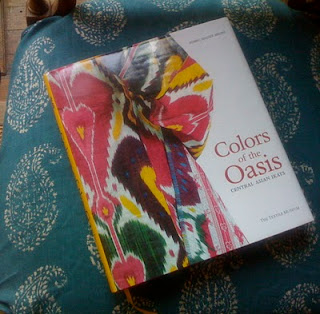 Sumru Belger Krody, curator of Eastern Hemisphere Collections at The Textile Museum, clarifies any possible confusion about ikat terminology: the word ikat may be used to identify a particular type of patterned textile or the multi-step pattern-making process itself.  The term comes from mengikat, a Malay word meaning “to tie” or “to bind.”

And Kate Fitz Gibbon, an authority on nomadic silk-weaving, writes in the book, "Compared to other more humble forms of cloth, Central Asian silk ikat has had a particularly dramatic and romantic history; it is descended from the great luxury textiles created in the several thousand-year history of textile production along The Silk Road." She adds that true ikat is handmade, requiring the involvement of a dozen specialized craftsmen. 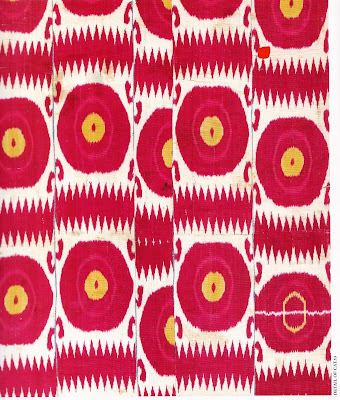 [Late 19th-century - Early 20th-century Central Asian (Bukhara, Uzbekistan) Ikat, Silk/Cotton, The Textile Museum
Murad Megalli Collection. ]
The book was definitely a team effort, too. Seven scholars contributed essays, covering topics including: Oasis style, technique and craftsmanship, Russian influences, in-depth history (obviously) and ikat in the 21st century.  I asked Krody about the experience and she wrote back, “For me, and I would imagine for many others, writing a book is a very satisfying process in which ideas progress into one meaningful whole of text and images that is both visually attractive and intellectually stimulating.”

From a visceral perspective, when I hold the large catalogue in my hands, I'm struck by the incredible color combinations used in the old ikats. Those alone will no doubt inspire graphic designers, painters, and interior decorators. At the same time, I'm finding the appendix of ikats from the Topkapi Palace Museum as well as the glossary immensely helpful. It really is an exceptionally comprehensive book. More images can be seen in these past posts:

More Candy
They're Getting Dressed
Landing the Cover

BTW: After I did the "Candy" post, Charleston-based interior designer Angie Hranowsky sent me a link to this vibrant rug. What a great eye she has.
Posted by Style Court at 8:19 PM

I think I might need to buy this catalogue. I've loved your posts about this exhibition! Thank you Courtney.
; ) Barbara

Oh, I really appreciate that Barbara! Makes the effort worthwhile :)

I'm glad I bought a copy now because some other ikat books from the past have become crazy-expensive! Of course, I'm textile-crazed, but it's an amazing catalogue.

I'm with Barbara! I've learned so much about textiles from you! I too need to get this catalogue :)

Oh gosh Jennifer, what a cool thing to hear. I always think of you as an encyclopedia of patterns and prints :)