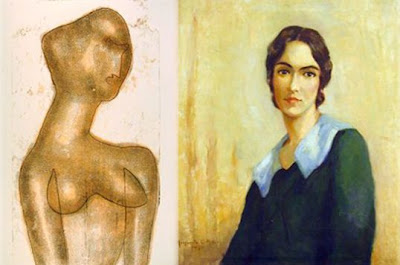 [At left, Untitled, 1955 by Otto Neumann (1895 – 1975), and right, Jane Allen (Mrs. S. A. Wideman), 1930 by Marguerite Miler (1895 – 1956). Images via Gibbes Museum of Art.]
We're now in week five of the Gibbes Museum of Art contest, Face Lift: Caption This! Inspired by the Gibbes' current exhibition of American portraiture, the low-key competition encourages the public to submit captions for specific pairings from the show (in case you missed my earlier post, prizes include free museum admission and a facial from The Spa at Charleston Place).

This portrait pairing really grabbed my attention.  German artist Otto Neumann's mid-20th-century woodblock on paper shows an anonymous, abstracted figure while Charleston artist Marguerite Miller's oil on canvas is an example of the representational style that was still embraced in South Carolina throughout the 20s and 30s (and beyond). But, as noted on the Gibbes' blog, there are striking similarites common to both works, notably in the poses and forms: "...the juxtaposition of the images makes it appear that there’s a conversation going on."
Posted by Style Court at 1:33 PM

Thanks for sharing our museum and exhibitions - and the fun Caption This! contest - with your readers. I hope you'll let us know when you are in Charleston - we would love to say hello! In the meantime, share a caption in our contest if you get the urge!

Lasley -- I appreciate that!