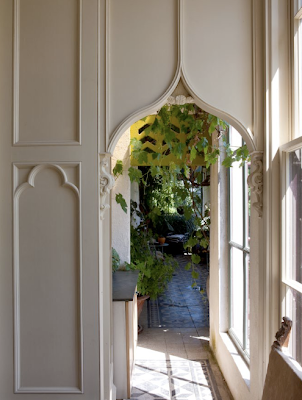 [All photography by James Fennell from The Irish Country House courtesy Vendome Press 2010.] 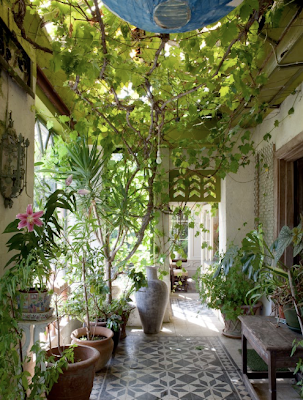 In yesterday's Halloween post, I mentioned that the old greenhouse used in the 1990s witch flick, Practical Magic, is my favorite element of the movie. Stylistically, the attached greenhouse appears to be late 19th century, so I was reminded of another Victorian garden conservatory featured recently in the Irish Country House post.

What I neglected to add the other day is that a cutting taken in the 1860s from the Great Vine at Hampton Court now forms a green canopy over the conservatory at Huntington Castle in Ireland. This greenhouse was a later Victorian addition to the home, which has roots in the 15th century. According to the authors of The Irish Country House, a naive mural painted by the children of Huntington was also added to the conservatory in the 1930s. A Gothic arched doorway in the castle's tapestry room leads to the verdant enclosed garden.

BTW: I never found time to finish the list of "haunted" historic house tours; instead, in the previous post, I included links to The House of the Seven Gables and old Salem.
Posted by Style Court at 1:50 PM

Nice.
I would like to scare up enough time to sit back and cast a few spells ( zzzzz's ) in a room like that!
Nicely done, and what an amazine place to hang.
L.

A lovely post. I am with *L*...I, too would like to scare up enough time to sit back and cast a few spells...in a room such as that!! Have very fun. I grew up in Boston. As a child there were many trips to The House of Seven Gables. Also, one of the finest museums in Boston...Isabelle Stewart Gardener. Every week, before Halloween, they would have a haunted house in what was her once garage!!
What a treat it was...Now lovely memories. Happy Halloween, M.

I love these pictures! Amazing...

So beautiful. Love the gothic arch of the entry - really makes you feel like you're entering something secret and special. Have a wonderfully spooky day tomorrow!

What a wonderful example of the power of 'heritage', that vine: how you can take a cutting from a very old plant and allow it to grow and flourish somewhere else.