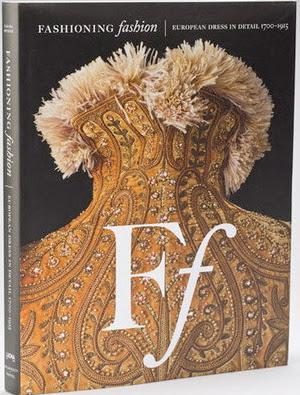 [Exhibition catalogue: Fashioning Fashion: European Dress in Detail, 1700-1915.]
Enfilade editor Craig Hanson's post on LACMA's sumptuous new exhibition, Fashioning Fashion, was my first read this morning and now I want to help spread the word. With this show's focus on details -- intricately crafted trimmings, luxe textiles and sophisticated tailoring -- I think it will inspire interior designers as well as fashion people. Having just covered two distinct books by women with ties to both worlds -- Mary Randolph Carter is a longtime creative director for Ralph Lauren while interior designer Mary McDonald originally studied fashion at Parsons -- I've been thinking a lot about overlap between the two domains.

The thick, brush-like ostrich feather trim on the 1891 silk-embroidered evening mantle shown above reminds me of an embellishment Mary might used along the edge of a curtain or table skirt. But it also calls to mind the lush bits scattered throughout Daniela Kamiliotis' Connecticut studio. (Actually, the high neck makes me think of fine artist Elizabeth Turk and her marble collars, too.)

Fashioning Fashion highlights LACMA's internationally recognized collection of European men's, women's, and children's clothes and accessories. The exhibition centers on the period between 1700 to 1915 with emphasis on major changes in tastes and production. French couturier Aemile Pingat designed the opulent late-19th-century piece chosen for the catalogue cover. If you'd like to mark this in your calendar, the show continues through March 6, 2011.
Posted by Style Court at 7:53 AM

Lovely image.
I cannot help but think there is definately an overlap withing the two worlds of fashion and home design.
And why not? The two interclock the fabric of ones self existence.

Just a lovely detailed image, dress, lampshade, panel of curtains, or shoe? Could be a description of all of the above.
Thanks,
L.

Thanks, Courtney, for the mention and for making these connections -- especially to the marble collars.
-CAH

I too considered a career in fashion and for a long time wanted to be a layout editor. Wish I was planning to head west soon and could see the show. What a gorgeous collar on that dress!

Laura! I didn't know that. Fascinating. I'll be looking at your work from a new angle now. Actually, now that I think of your flair for trim, tailoring and editing -- it makes perfect sense.

Leslie -- Your comments are always so insightful and poetic. Thank you for that.

Craig -- You beat me to the punch with this one :)

Seeing this I suddenly thought that your posts are quite like intricately worked textiles, their many links and references and imaginative shifts giveng them a rich, tactile quality :)

Emilie -- I'm copying your comment to save. I love that analogy!