Anticipating: Chinese Style at the V & A 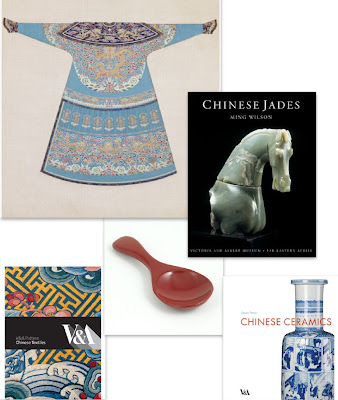 [From the top left: Illustration of a summer court robe worn by the Emperor, from The Illustrated Regulations for Ceremonial Paraphernalia of the Present Dynasty, commissioned by the Qianlong Emperor. China, 1736-1795 © Victoria and Albert Museum / V&A Prints; assorted books on Chinese decorative arts; and in the center, a red lacquer spoon.]
Since I last mentioned the V & A's upcoming exhibition, Imperial Chinese Robes from the Forbidden City, the museum has updated its site with more images and information. There is a curator's blog, a calendar of related workshops, talks, and seminars, and a special selection of Chinese-themed goods in the gift shop.

You may recognize a couple of the books pictured above from my past posts but there are other great titles to explore in the shop as well. 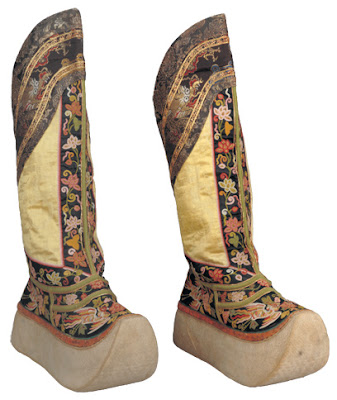 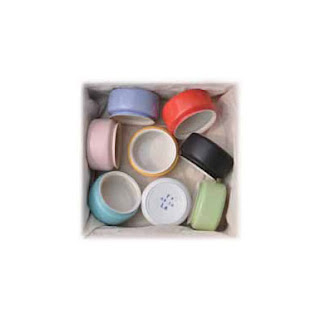 Hi! My name is Ana, and I´m from Buenos Aires. I´ve been following your posts since july, and wanted to say that Style court is amazing. I love decor and different cultures(such as african, middle-east and japanese or chinese ones), and everything you post is inspiring; we travel through these beautiful images.I´ll visit you soon again, as always.
My boyfriend and I are starting a new project, and I wanted to leave the blog abress (I´d be grateful if you take a look, and leave a comment if you want -any recommendations?) We recycle old furniture.
www.elbuhoyelmercader.blogspot.com
Have a nice weekend!

How nice to hear from you. Thanks for introducing yourself.

How about those boots! They're divine. Lovely blog. Look forward to seeing you over at mine.