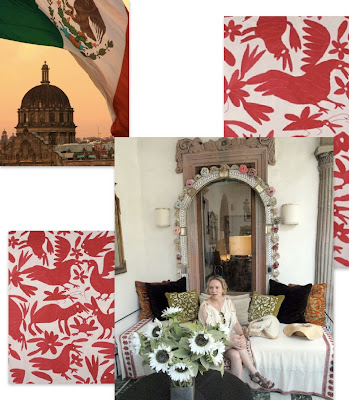 [Mexican textile via The Loaded Trunk. Shown on the left, Mexican flag and church; on the right, Michael Smith's assistant Maya sits on a sofa in Casamidy -- both scenes from Man Shops Globe, episode seven, season two, from Sundance Channel.]

I guess most everyone is familiar with the in-depth morning-after Mad Men commentary that runs in a host of national publications (Slate's entertaining analytical offerings come to mind first). If I'd been more ambitious, I would've done something similar each Thursday after Man Shops Globe. Although I didn't find time for that, at least I can share these little reminders with fellow fans.

Episode seven, the one scheduled to air on Wednesday, August 11, is a must-see for anyone passionate about textiles and/or the style of interior designer Michael Smith.  For this show, Smith joins Anthropologie's buyer-at-large, Keith Johnson, in Mexico. There are beautiful preview images over at Sundance but I don't want to be a spoiler and give away too much.  Let's just say the episode will appeal to serious chair addicts like Mrs. Blandings and me, as well as those who gravitate to a variety of Oaxacan textiles. The Mexican embroidery shown above is from The Loaded Trunk.

Just catching up on recorded shows now. Your heads up on the last one was spot on.