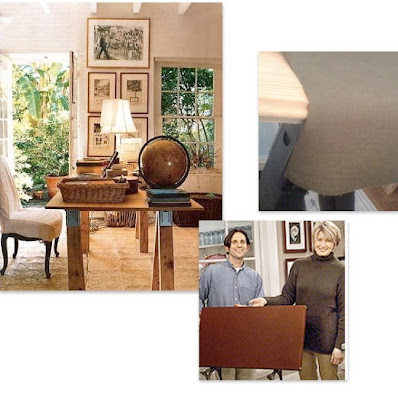 [From the left, Julia Reed's homemade writing desk photographed by Francois Halard for Vogue February 2001; my desk in progress; Tom Tamborello and Martha Stewart, Martha Stewart Living Television, November 1999.]
Since 2001, I've been drawn to Julia Reed's homemade writing desk (the one photographed in her former, slightly bohemian digs in New Orleans' French Quarter) and if all goes well, my own interpretation will be finished this weekend. Mine is actually going to be a painted and upholstered hybrid, incorporating ideas from Martha Stewart's team -- stylist, Tom Tamborello, and editor, Page Marchese Norman -- along with inspiration from Haskell Harris. (And coming in under budget at $52!) 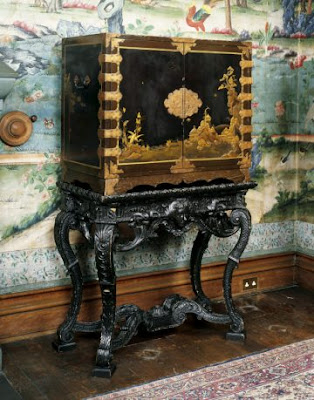 [Seventeenth-century Japanese lacquer cabinet on a William Kent-style stand, at Penrhyn Castle, Gwynedd. ©NTPL/John Hammond.]
In the meantime,  over at the National Trust's Treasure Hunt, Emile de Bruijn has posted some fascinating examples of lacquer cabinets with 'hybrid' doors. (My own rathers sloppy description.) He's started one of the most interesting conversations about chinoiserie that I've come across in a while. Click here for more. 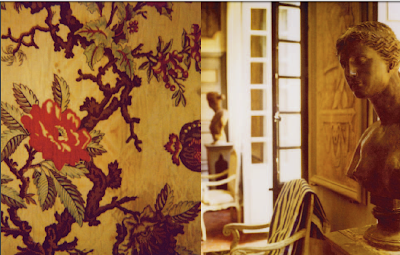 [Images via Francois Halard's Visite Privee.]
Speaking of creative spaces and Francois Halard's work, the new exhibition catalog, Visite Privee, looks like a must have. The book highlights the photographer's shots of artists' studios; included are Cy Twombly, Julian Schnabel, Richard Avedon, Paul Cezanne, Ahn Duong, Miquel Barcelo, Robert Rauschenberg and more. Halard's own house in Arles is featured too. Learn all about it here.
Posted by Style Court at 9:53 AM

Courtney,
What a great post. I'm facinated by the whole European-ization of Chinoiserie regarding symmetry. I had no idea. Always learn so much from you - thanks for the history lesson!
Can't wait to see your writing table. I do hope you will post pics.
L.

Well, Emile is such a great source of information! Glad you checked it out. And I'll definitely post pictures. Appreciate your enthusiasm. Have a great weekend!

Looking foward to the reveal of your hybridization program. I write to you from my own home-made desk (saw horses and hollow-core door that I upholstered (even the legs) in a dark green paisley fabric almost 20 years ago. Back then I could not find a computer table I like with a good height for the keyboard. I still love my little "high bred."

Clearly you were way ahead of the curve. I fear mine will be bland in comparison to your 'high bred.' Stay tuned...

Thanks very much Courtney - I think 'hybrid' is a very apposite way to describe chinoiserie.