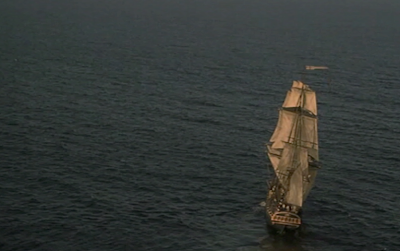 [Screengrabs from 20th Century Fox's Master and Commander: The Far Side of The World - 2003.]

So, the guys deserve some attention for their stitch craft too. Last week I was in the mood to post a few antiques suggestive of Master and Commander, but when I began searching for seafaring items to use in another post, I stumbled upon "woolies." 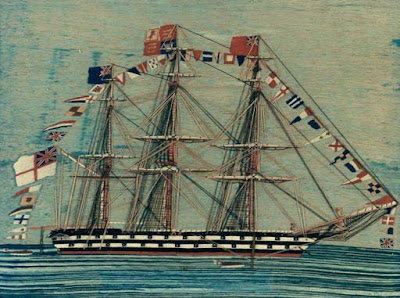 [A 19th century sailor's wool work picture of a British dressed ship embroidered with blue sky and a blue-and-white sea. Christie's.]
Woolies, or sailor's wool work pictures, are embroideries of marine vessels (and in some cases patriotic symbols, such as flags) done by Navy men aboard ship or after retiring from active duty. According to dealer Paul Vandekar, most woolies were made from the mid-19th century on through to World War I, when they went out of vogue. That dates them after the  Master and Commander era. Still, the graphic nature of these folk pieces -- oceans interpreted with stripes and zig zags -- caught my eye. 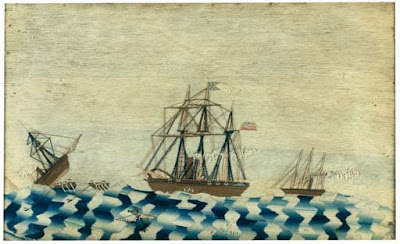 [A 19th century sailor's wool work picture of a rescue at sea embroidered with a dramatically rendered sea. Christie's.] 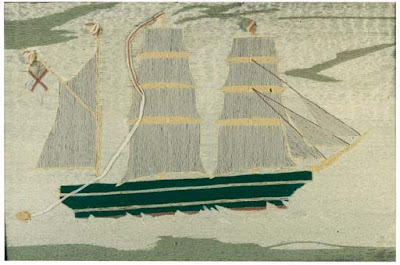 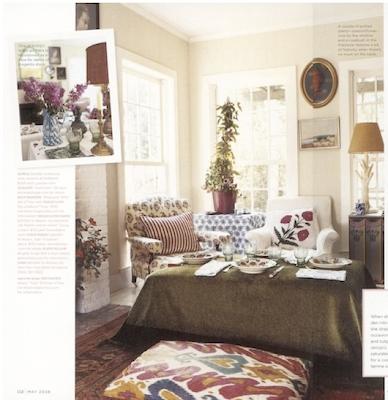 [Carolina Irving's house photographed by Miguel Flores-Vianna, domino, May 2008.]
BTW: I decided to update the Oasis post with a smattering of images representing interiors from the past six years or so. In organizing the Textile Museum's big fall show, Colors of the Oasis: Central Asian Ikats, I think the curators want to emphasize the phenomenon of the textile's longevity, and how it reemerges during different decades, so it seemed natural to round-out the post with samples from recent years.
Posted by Style Court at 7:10 PM

I've always loved the thought of decorating a man's abode with the sailing motif. How gorgous and handsome would that be?