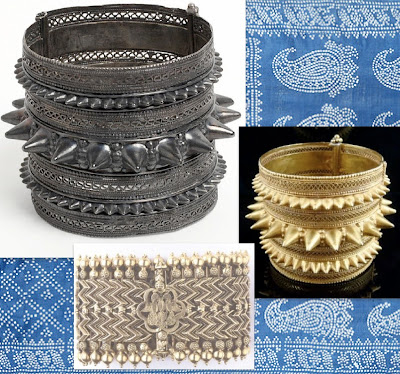 [Credits follow below.]
For all the times during the run of When Gold Blossoms: Indian Jewelry from the Susan L. Beningson Collection when I posted and re-posted that 19th-century bracelet with wave pattern (shown above, lower left), I never remembered to link to another stunning example of Indian craftsmanship discovered in Ralph Lauren's Gift Vault by Mrs. Blandings.

Pictured above on the right, Ralph Lauren describes it as an intricate, circa 1850, Indian wire-work spike bangle, handmade in 22-karat gold as a gift to the wife of a British army general. The company also notes that a similar piece belongs to the V & A in London. I had to check that out. 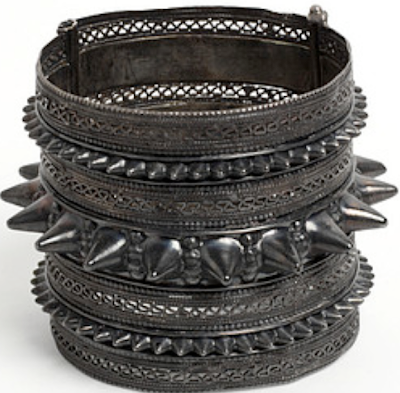 Wow.  This must be the one. We get to see nearly identical designs in both silver and gold. The V & A's  piece is silver, late 19th century, with a label that says it was 'made by the natives at Zanzibar by order of the late Sultan, and brought to England by his friend the late Monsieur J.B. Camosin'. Its delicate filigree decoration makes a nice foil for the bold spikes. According to the museum, the Zanzibar archipelago's distinctive history involving international trade shaped Zanzibari arts with visible Indian, Portuguese, British, Persian, Arab, and African influences. 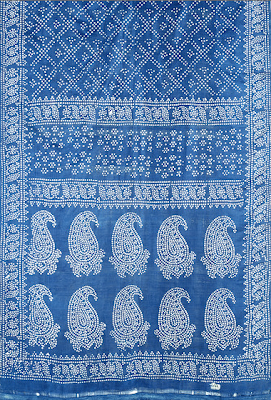 I added the V &A's late-19th-century (but new to me) Indian sari to the mix, in part because of the timeline, but also because the boteh (stylized leaf or tear drop shape, now commonly called paisley) with border reminded me of my linen slipcover. 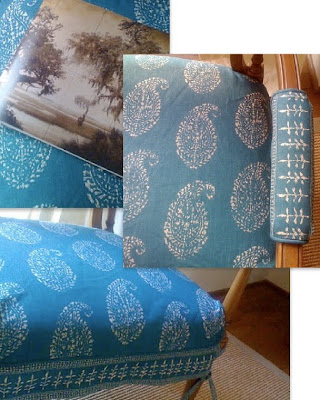 The silk sari was discharge-printed in imitation of tie-dye with small white spots on a blue ground. Peter Dunham's Kashmir Paisley is aptly named because the boteh motif is closely associated with North India, specifically Kashmir, says the V & A. By the way, to see the border on PD's linen used with punch, check out the poufs in Kristen Panitch's Palisades Riviera project.
Posted by Style Court at 8:00 PM

Your ability to make visual connections never ceases to amaze me!

Oh, thanks Shannon. I'm glad it came across as fluid. Right back at you on the visual connections thing!

Excellent sleuthing. These posts of yours are like little online exhibitions.

Emile, what a nice thing to hear on a groggy Monday morning! Now I wish I'd searched for more examples :)

I have that bracelet, it was in a box of junk that a friend gave to me when she moved. I love it and the indian textiles together.
Hope you are doing well.
pve

I love Peter Dunham's textiles and am thankful you introduced me to more of Kristen Panitch's work. Her ability to mix patterns and fabrics is stunning and the Kashmir fabric is equally beautiful! I fall for blue and white regularly...Thank you for sharing.

Patricia, how fortunate for you! Thanks for stopping by.

Isn't her work great? I love, love those cylindrical poufs and all of her uses of PD fabrics :)