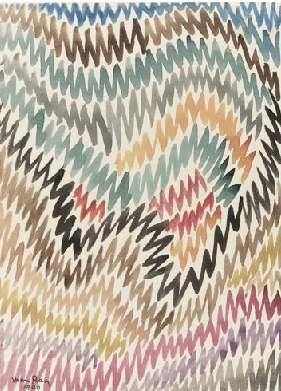 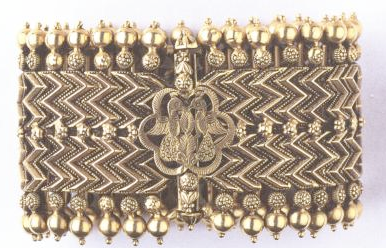 I had planned to simply post a reminder that there are only a few weeks left to see this 19th-century Indian bracelet with lahariya pattern, along with numerous other gold pieces, in When Gold Blossoms: Indian Jewelry from the Susan L. Beningson Collection on view at the Carlos through July 11, 2010. But then I stumbled upon the Man Ray. I had to juxtapose the ordered, rhythmic zig-zags of the bracelet with Ray's more frenetic lines.

According to Sotheby's, the watercolor may represent the fear Ray felt as he fled the Nazi invasion of Paris in 1940 and abandoned his photography career. At the same time, he may have felt exhilaration about a new found freedom and return to a previous passion: painting. This work is included in the upcoming Impressionist & Modern Art Day Sale. 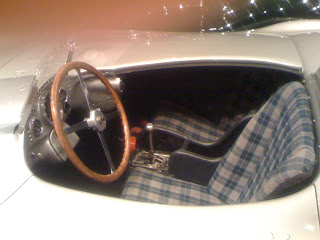 Man Ray sems to have been one of those brilliant photographers who felt he had to try to be good at something else, with disappointinbg results. I am always slightly underwhelmed by his drawings and paintings, whereas his photographs are almost always stunning and have his unique 'je ne sais quoi'. Sorry to be slightly negative (love the bracelet!) - but it is the same with Cecil Beaton: first-rate photographer, but so-so draughtsman. And Beaton had this similar delusion that drawing and painting were somehow more elevated than photography, and that he should try to master them - curious.

I didn't know Man Ray painted, but I like that work. It would be a fun one to try to recreate as well. Maybe even w/ nail polish a la Scott Ingram...

As for the cars at The High, I've been looking forward to it!

Always appreciate constructive criticism -- especially when the subject is no longer around. Thanks for giving us much to ponder.

Man Ray painting is gorgeous- as is the bracelet...

Oh dear, now that song is in my head!!!!! Glee style, oh boy. Pretty post btw :) Inspiring me to use my woodblocks.

Love them both, Man Ray was so talented with different elements. The colors combinations always move me.