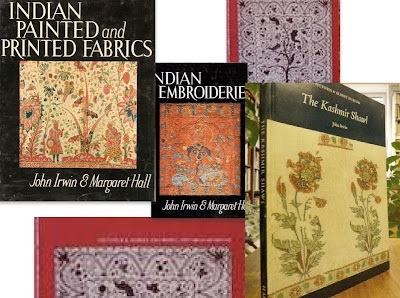 [Book images clockwise from the left:  Calico Museum of Textiles, Antiquariat Orban & Streu and Library Thing.]
My ever-expanding wishlist includes four or five books written, or co-authored, by John Conran Irwin (1917-1997). The former long-time Keeper of the Indian Department of the Victoria and Albert Museum has been credited with something rather monumental: shaping Western perceptions of Indian art history. Textiles, and, as his obituary in The Times noted, "the complicated mutual interchange of design ideas and motifs between East and West," were his area of expertise. 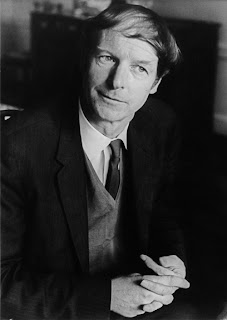 [Image via the Victoria and Albert Museum.]
Some of you may recognize a few of the book covers above from past posts about the Calico Museum of Textiles. Irwin was deeply involved with the museum in Ahmedabad, assisting with its collections and co-editing its publication, The Journal of Indian Textile History. With Margaret Hall he created the first two catalogs of the Calico Museum's collections -- the now very pricey books on my wishlist -- Indian Painted and Printed Fabrics (1971) and Indian Embroideries (1973). Another of his volumes, Origins of Chintz (1970) is also highly coveted. Today though I found a very affordable 1974 softcover edition he did for the V & A: The Kashmir Shawl. Multiple copies are available here. And a box set of all seven volumes of the journal together with Printing on Cotton at Ahmedabad, 1678, costs roughly $87.
Posted by Style Court at 10:24 PM

C- I could see you having a career like Irwin. You would be so good at it because of your passion for textiles.

Since you like so many things Indian, I wanted to recommend a book "Handmade in India - A geographical encyclopedia of Indian handicrafts".