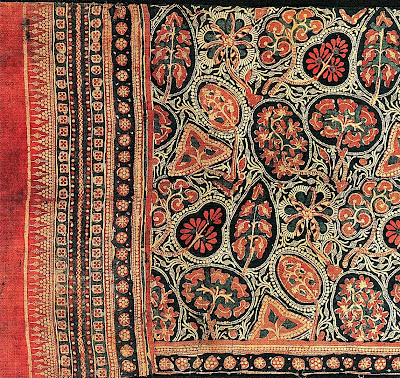 [Maa ceremonial banner, 14th-century, Gujarat for Indonesian market, cotton, block-printed mordant-dyed and block-printed painted resist-dyed from Woven Cargoes: Indian Textiles in the East.]
I'm still putting together what I hope will be a mossy, fern-filled, summer woodland post but in the meantime here's a peek at some of the old textiles highlighted in John Guy's Woven Cargoes.  All originated in India and were made for export. Not for Europe or the American colonies as we might assume. No, the examples shown here were made for Indonesian and Japanese markets.

Who else wants pillows made from block-printed cotton similar to the six-hundred-year-old ceremonial banner above? (I keep imagining pillows and upholstery projects.)  Posted at top is just a detail view. Made in Gujarat for Indonesian buyers, it is radiocarbon-dated 14th century (V & A  collection). 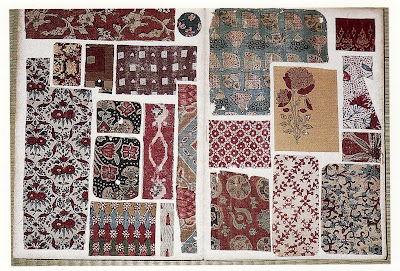 [Click to enlarge.]
The Japanese were enthralled with the 'exoticism' of Indian textiles. Guy says that the volume of Indian prints sent to Japan is not as significant as the impact Indian textiles had on Japanese design. Ultimately, imitations known as wasarasa or 'Japanese sarasa' became quite common. (Sarasa is cotton cloth decorated with hand-painting or printing.) Shown above, samples of historical Indian textiles preserved in a late Edo period album belonging to a private Kyoto collector. 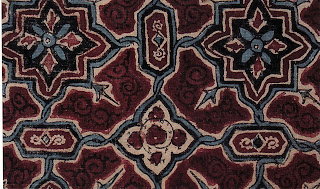 This fragmant caught my eye. It's from a late 18th-century painted modant-dyed and resist-dyed Indian sarasa made on the Coromandel Coast for the Japanese market. 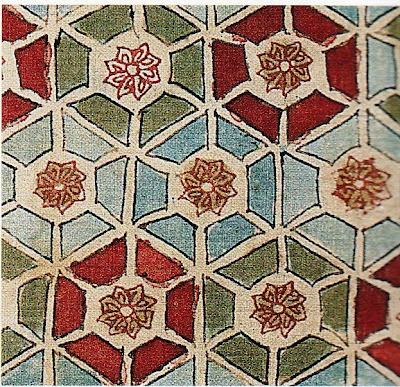 
[All images above from Woven Cargoes: Indian Textiles in the East.] 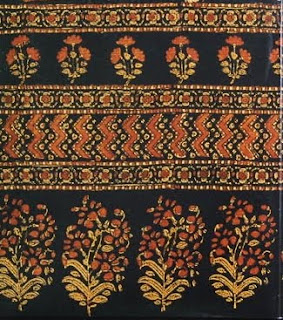 [Detail view via Calico Museum of Textiles.]
Related past post: On the Borderline Again
Posted by Style Court at 6:25 PM

Mossy...fern-filled. Be still my heart. I am looking forward to it.

I cooled off a bit just reading "mossy, fern-filled, summer woodland post." I'm sure you'll post it on the hottest stickiest Atlanta day.

P.S. I think of you each time they change the window at Providence. This last time I went in for a close look at the chest of drawers. It was a knock out and new. I wanted it. It was gone in a few days replaced with another.

Yes, I've been watching the changing chests too. Such a great cooling blue backdrop.

Glad you are also drawn to the mossy green things I'm thinking of. I might be browsing your Flickr archives for inspiration.

These fragments alone are splendid. Love anything visual that sets off such wide associations in the mind.

Marvellous post again. These textiles are just breathtaking. I especially like the last one with the rusty and ocre coloured motifs on back ground. Very beautiful.

Your textile posts just keep getting more interesting and informative and inspirational. I don't comment much these days but I never fail to stop by. Thanks for all your wonderful efforts!

Petra, BWS -- appreciate your thoughts too. Thanks for popping in.

I adore these posts, the textiles are so well researched and just breathtaking!!

Love the prints and always a fan of hand block printing;