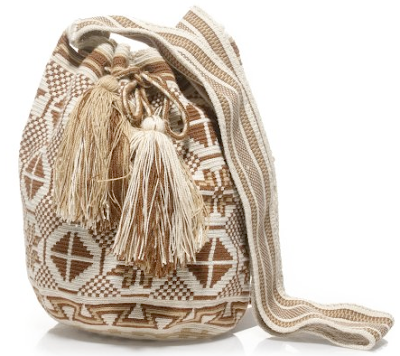 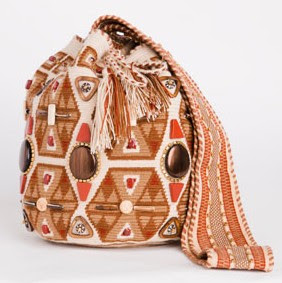 [Oscar de la Renta's interpretation for the The Mochila Project.]
Handwoven Wayuu mochila bags have received a lot of buzz in recent months. I'm among the many who are drawn to them so, no surprise, I started combing back issues of Hali and Selvedge for information about traditional weavings from Columbia. 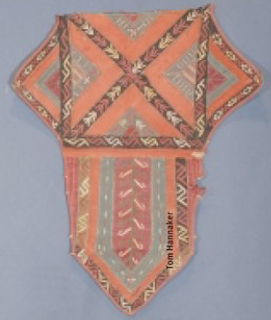 [Tom Hannaher's ancient coca bag photographed by Fred Mushkat; image via Hali.]
At the moment I haven't found what I was looking for, but I did stumble across an ancient South American coca bag, and that somehow led me to a past exhibition at D.C.'s Textile Museum, The Finishing Touch: Accessories from the Bolivian Highlands, where I noticed a mid-20th-century man's coca bag that could possibly inspire JADEtribe. 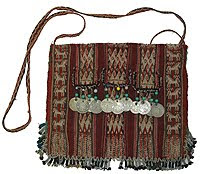 [The Textile Museum 1989.28.9. Latin American Research Fund.]
And that led me back to a Bolivian weaving I'd already mentioned in a past post. 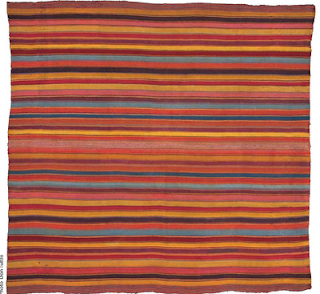 [Photo by Don Tuttle via Hali.]
Long story short,  no original South American textile blog post for today.  However, turning a page in Selvedge and mentally traveling to another continent, I did learn a fact that makes an interesting follow up to the Out of Africa post. 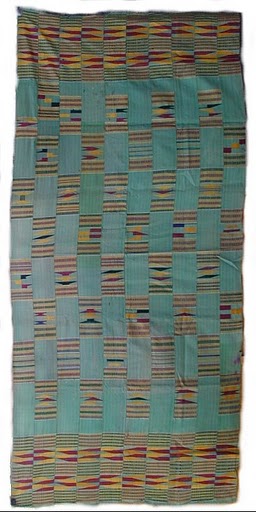 [Asante kente cloth from the archives of Adire African Textiles.]
According to the magazine, the long history of indigenous West-African textile production has been shaped by complex factors including, first, the arrival of Islamic textile merchants and later European colonialists but through it all West-Africans held onto their own traditions. In fact, historically, weaving has been a very prestigious job in the region. Now I'm more curious than ever to know where Milena Canonero and Josie MacAvin sourced the various textiles seen in the movie, which is set in East Africa. 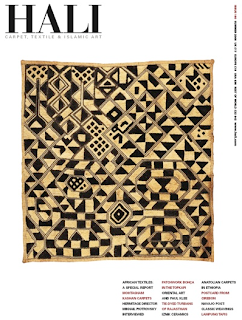 Also, if you're interested in ordering a back issue, Hali summer 2009 has a special report on African textiles.
Posted by Style Court at 10:53 PM

stop! you are driving me crazy-I want them all, and more. I may need a textile intervention

That is one of the most beautiful Kente cloths I've seen. Mark and I dream about owning one but finding the "one" and at the right price hasn't happened — yet!

Not exactly distraught-but close, to NOT see the JCrew bag available online. pgt

I know. When I posted this it was in 'Jenna's picks' online. For now it appears to be sold out :(